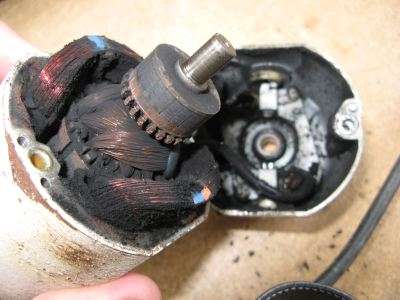 Electric motors convert electrical into mechanical energy. Achieved by the interaction of the magnetic fields set up in the stator and rotor windings.

There are a number of different types of electric motor:

Design factors to consider when choosing an electric motor:

In electric motors the armature is the rotating part.

The design of the rotor is dependent on the type of motor.

The maximum torque a motor will develop at rated voltage without a relatively abrupt drop or loss in speed.

Sliding contacts, usually carbon, that make electrical connection to the armature (rotating part) of a motor or generator.

In the image the brushes can just be seen pushing through the plastic holders.

Brushes wear down over time until contact is lost with the commutator and the motor stops working. Brushes are often a replaceable item, replacing brushes in the Unimat 3 motor.

Brushes can also generate a lot of carbon dust and this can lead to electrical breakdowns in the windings.

A centrifugally operated automatic mechanism used in conjunction with split phase and other types of single-phase induction motors.

An electrical switch that periodically reverses the current direction in an electric motor or electrical generator.

The commutator consists of a ring of the copper wire endings from the surface of the armature. When the armature turns, the commutator is contacted by brushes which slide over it and transmit the generated electricity on to be used

Windings embedded in slots in pole pieces, connected in series with the armature, whose magnetic field opposes the armature field and cancels armature reaction.

Machines that have a series field in addition to a shunt field.

Such machines have characteristics of both series- and shunt-wound machines.

An efficient, popular type of armature designed so that the entire length of the winding is cutting the field at all times. Most wound armatures are of this type.

The efficiency of a motor is the ratio of electrical power input to mechanical power output.

Most motor failures stem from damaged bearings or stator windings.

An inefficient type of armature winding in which many of the turns are shielded from the field by its own iron ring.

In most instances, the following information will help identify a motor:

A core built up from thin sheets of metal insulated from each other. The insulation normally consists of a thin coat of varnish.

Localized currents are induced in an iron core by the alternating magnetic flux. These currents translate into losses which end up as heat and their minimization is an important factor in lamination design.

An armature winding in which opposite ends of each coil are connected to adjoining segments of the commutator so that the windings overlap.

Steady state current taken from the line with the rotor at standstill, at rated voltage and frequency. This is the current seen when starting the motor and load.

The minimum torque that a motor will develop at rest for all angular positions of the rotor, with rated voltage applied at rated frequency.

A motor converts electrical energy into a mechanical energy and in so doing, encounters losses. These losses are all the energy that is put into a motor and not transformed to usable power but are converted into heat causing the temperature of the windings and other motor parts to rise.

Excess greasing can however damage the windings and internal switches, etc.

The full-load continuous rating of a generator or other electrical equipment under specified conditions as designated by the manufacturer, and written on the nameplate.

There are numerous applications of electric motors and the type of noise produced by each may be very specific to the installation and type of motor. There can be a number of reasons why electric motors are perceived as being noisy.

Electric motor in which the armature and field windings are connected in series with each other.

Machines in which the armature and field windings are connected in parallel with each other.

A type of rotor winding in which heavy conductors are embedded in the rotor body. The conductors are shorted together at the ends by continuous rings. It is widely applied in ac induction motors. Physically, it appears as a rotating squirrel-cage, thus the name.

The maximum torque without burning out the motor.

The stationary part of a rotating electrical machine.

The speed at which the rotating field in an ac motor revolves. This speed is a function of the number of poles in the field and the frequency of the applied voltage.

The no-load speed, stall torque, and the load point are used to establish the motor torque load-line.

Knowing the no load speed and available voltage, you can then establish an initial back EMF constant and the motor torque constant.

The stall torque combined with the load-point torque helps establish motor size. The duty cycle, temperature, and expected heat sinking are used with the motor size to determine the temperature rise of the motor.

The power absorbed by the fluid surrounding a rotating body.

Wires that are laid in coils, usually wrapped around a laminated soft iron magnetic core so as to form magnetic poles when energized with current.