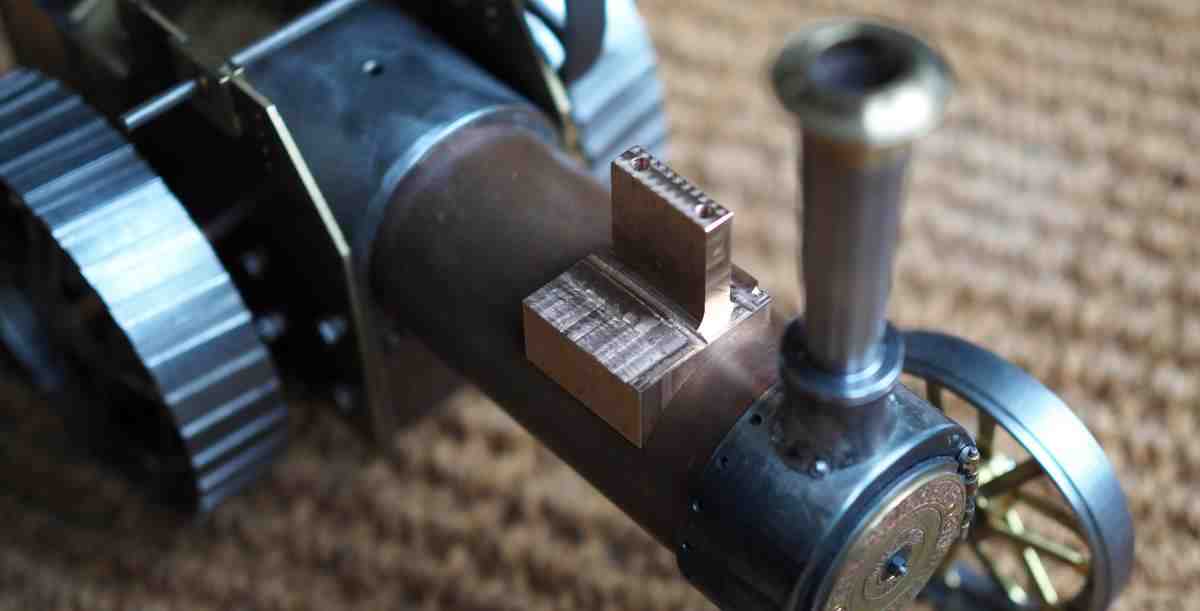 The Burrell traction engine cylinder is a complicated part, especially when at 1/20th scale. This might have been made more complicated by my design. However, this page is all about describing the design and following as I make and assembling the parts.

The design has taken me back to one of the first engines I ever made, the Stuart 10V. This is a double acting engine of bore 3/4″ and stroke 3/4″. Just over double the size in each dimension.

The Burrell engine will be just 12mm bore and 12mm stroke. The valve arrangement will be the same as the 10V.

The cylinder saddle is made from Phosphor Bronze and this gets silver soldered to the boiler.

The underside of this saddle needed to be machined to match the curvature of the boiler. The challenge was achieving this with a flycutter.

The saddle part machined is shown resting on the boiler below. There are two holes, the rear hole is the steam port and a safety valve will locate on top. The front hole is there for jig location and will be closed off. This saddle forms the Burrell traction engine cylinder block. A cast iron cylinder will get bolted to the side and a thin cover will merge this into the saddle. A valve chest will fit on the other side.

For the valve design I’ve looked at the Stuart 10V for inspiration.

Inspiration to the point of measuring the valve dimensions and scaling it to 50%.

The actual machining was quite easy. The difficult bit was adjusting the rotary table to remove any play.

Once all adjusted and tight the Burrell cylinder cavity was a treat to mill with a carbide cutter.

I didn’t want to fly cut this and so I made an abrasive drum. I felt that this was less aggressive. It worked really well and I now have a surface I can silver solder to the boiler.

Crosshead Guide or Trunk Guide, not sure which of these terms is most correct for this sliding crosshead support.

This was machined from cast iron and I took inspiration once again from the Stuart 10V.

Valve Chest Made from Parts

The valve chest was made from 2 parts that were silver soldered together. Then the centre section was milled away.

The cover on the valve chest needs an etched plaque. This is rather small.