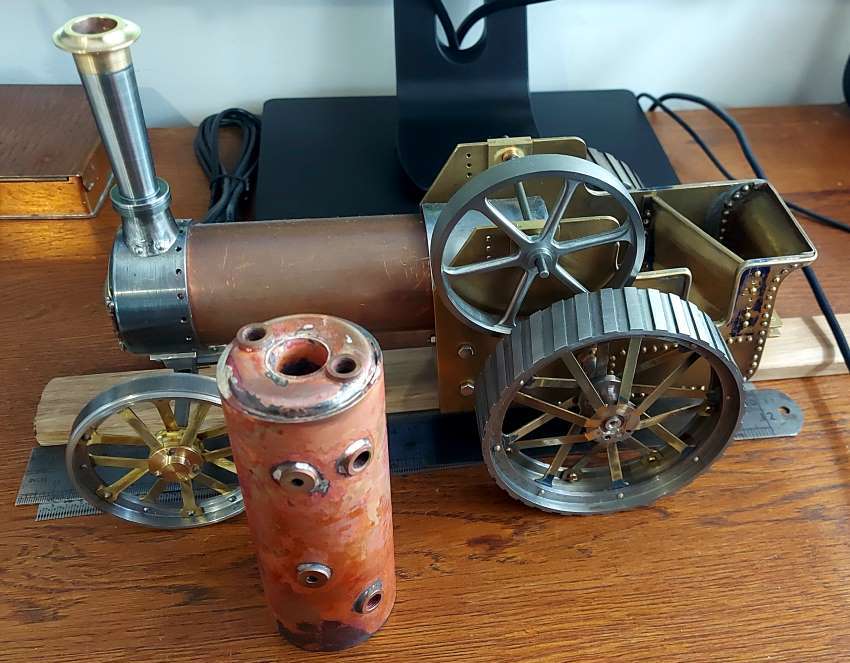 Making a Small Vertical Boiler to test my skills and to understand the requirements in making a boiler. This really is a case of learning how to make and assemble the boiler. Also and perhaps most importantly how to test and ensure it is safe. Then I will move on to how to operate it.

The boiler for the Burrell is just a set of parts. However, before finalising this design I thought I should make a boiler and see how easy or difficult it is to do. So using the same outer copper tube I designed a simple vertical boiler. This boiler is very small. The boiler I’m making is much less than the 3 bar litres and as you will see in a later post will be hydraulic tested to 2x working and steamed to 1.5x working.

Sometime ago I made the boiler endplates using a simple press. This simple press being worked with a large nut and bolt.

The boiler fittings were all machined from phosphor bronze, brass has the issue of dezincification.

Phosphor bronze is not as easy to machine and thread as brass and so best to take your time. Another useful skill.

In the photo you can also see the blanking plugs and the safety valves.

The two bushes on the endplate are for the safety valve and steam supply. Both sit on the very top of the boiler.

The cross pipes are arranged to sit in the lower half of the boiler.

These pipes were all silver-soldered with the higher temperature easyflo-24 in the kiln that had been set and preheated to 810°C. In a separate article I introduced silver soldering in a kiln, a great way to get very controlled results.

The fittings in theshell of the boiler are for the pressure gauge, water level gauge and the lowest fitting is for a refill point.

The two larger threads were pre-cut as ME 1/4″x40tpi. The two bushes on the left hand side were drilled 3mm so that I could later machine and align them with a 4mm drill and then thread ME 3/16″x40tpi.

Doing these two later post boiler assembly was important for the water gauge alignment with the glass tube.

A final lower temperature silver soldering of the boiler with easyflo-55. Again this was done with the kiln.

I added this lower temperature solder to the outer side of these bushes to ensure I had a good fillet of solder on both sides.

Before, between soldering and after all parts were pickled.

Finally the boiler all silver soldered and cleaned.

This Small Vertical Boiler is just 117mm tall to the top of the bush on the top surface.

I want to try and run this boiler on coal as a test and a learning curve for me. Hopefully this will give me some experience ready for the Burrell boiler.

I made this grate from a piece of solid cast iron. The most difficult aspect of making this was working out how to hold it to all me to machine both sides and not break it.

K. N. Harris’ book he states that 1″ should be regarded as the minimum distance between the top of the wick and the boiler barrel. He states that 1.5″ is better (~38mm). My original boiler design was significantly less than this.

What I immediately noticed when doing this experiment was that the boiler heated up very rapidly. This was probably a mixture of air supply and burner to boiler distance. Hopefully this data set will help me explore this.

Getting Heat into the Boiler

This boiler looks the part, but getting heat into it is a challenge. This has lead me to a whole series of testing, mathematical modelling and then modifications.

I’ve instrumented the boiler with thermocouples and then logged the data with a Pico Technology TC-08 board.

Hydraulic testing of the small vertical boiler using a garden sprayer. This was a simple device to modify that would easily allow me to get to 100psi of water pressure.

Model of the Model Boiler

A simple lumped model of the boiler has allowed me to then estimate a number of parameters associated with the boiler.

Making a banjo bolt, siphon tube and connecting the tiny pressure gauge was rather a nice job.

The siphon tube protects the pressure gauge from the very high temperature steam.

Running an Engine on Steam

Plans for the lamppost engine are available as a PDF.

Two types of steam raising blowers have been made and tested. They increase the heat output of the methylated spirit burner 7x.

As I want to try running this on coal I made a small firebox for the methylated spirits burner. Then I made a more elaborate coal firebox. Hence the need for the grate.

This means I have two fireboxes and a chance to test both methods.