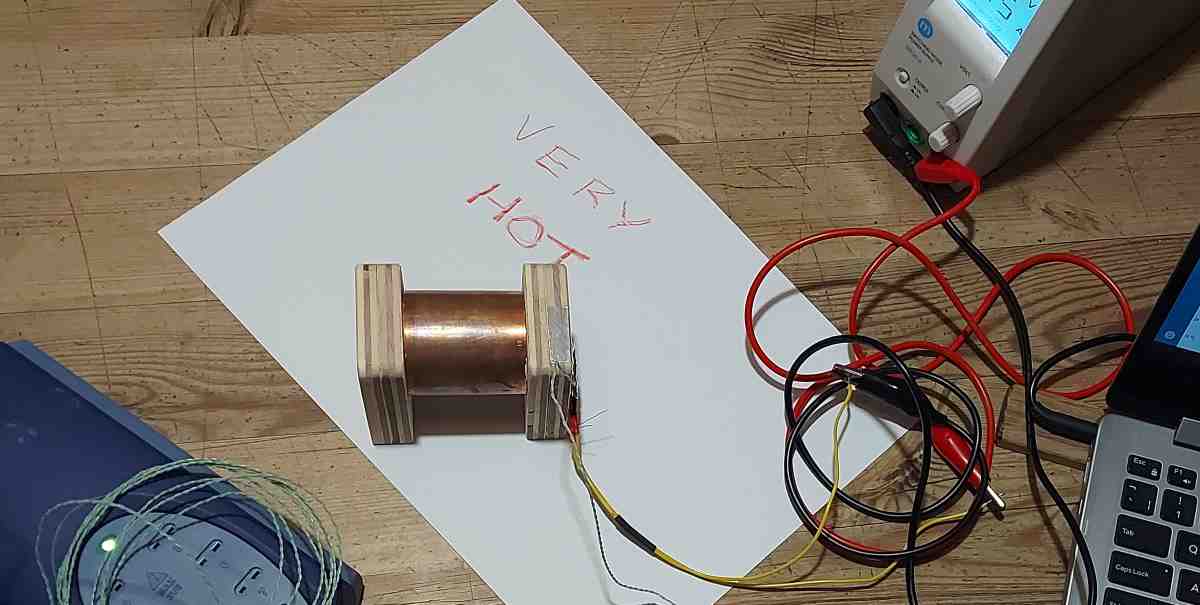 Before going too far with the calculations I needed an initial check on the boiler test object repeatability. All of the data analysis will end up informing the insulation of the Burrell traction engine boiler. This initial look at the data will give me an initial feeling as to whether the data is good.

The boiler heat loss test object is a 50mm length of the copper boiler barrel with a mild steel core.

A 4mm diameter hole through the centre allows me to heat it with a ceramic element and a 3mm hole near the top extends to the midpoint just below the copper shell. A thermocouple sits in the core at this point and allows the temperature of the test object to be logged.

The air temperature in the local environment is also measured with a second thermocouple. The test object was heated with the ceramic heater with an input power of ~30W. Once the core temperature reached 140°C the heater was switched off and the object allowed to cool. This cooling curve was logged and will be used in the data analysis to estimate the heat loss.

The heating and cooling of the object was repeated in the unclad condition. These two temperature curves where then aligned in time at the 141°C core temperature with the object cooling.

Thus a first view of the cooling curves for the repeat test shows they more or less overlap. Here are a few data points for the two tests:

The temperatures are very close on the cooling curves. As this is a bare unclad solid test object the variability should be very small. The variables will be ambient temperature, fixture temperature, surrounding objects, air flow and a number of other factors.

Considering these tests were done on the dining room table they are very close.

When measuring any thermal properties of an object, one of the first things to measure is the cooling curve. This will help to establish a number of factors. This is also a good curve to use to compare design options.