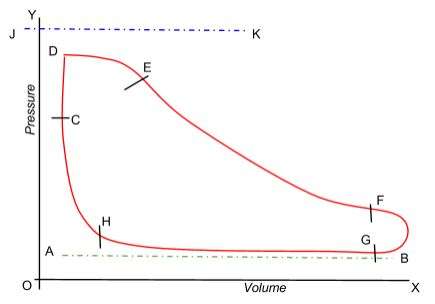 In the Steam Indicator Diagram the pressure in the cylinder is plotted versus the cylinder volume. This was developed by James Watt and John Southern to improve the efficiency of the steam engine. The work done is the area within the red curve.

The steam line D E is drawn when the steam valve is open and steam is being admitted to the cylinder.

The point of cut-off E is the point where the valve shuts and the admission of steam is stopped. It can be difficult to determine the exact point at which the cut-off takes place. It is usually located where the outline of the diagram changes its curvature from convex to concave.

The expansion curve E F shows the fall in pressure as the steam in the cylinder expands behind the moving piston of the engine – the volume of the cylinder is increasing.

The point of release F shows when the exhaust valve opens.

The exhaust line F G represents the loss of pressure which takes place when the exhaust valve opens at or near the end of the stroke.

H is the point where the exhaust valve closes. It cannot be located very definitely, as the change in pressure is at first due to the gradual closing of the valve.

The compression curve H C shows the rise in pressure due to compression of the steam remaining in the cylinder after the exhaust valve has closed.

The atmospheric line A B is a line drawn by the pencil of the indicator when its connections with the engine are closed, and both sides of the piston are open to the atmosphere. This line represents on the diagram the pressure of the atmosphere, or zero of the steam gauge.

The zero line of pressure, or line of absolute vacuum O X, is a reference line, and is drawn by hand, below and parallel with the atmospheric line. It represents a perfect vacuum, or absence of all pressures.

The line of boiler pressure J K is drawn by hand parallel to the atmospheric line and at a distance from it, by the scale equal to the boiler pressure shown by the steam gauge.

The difference in pounds between it and the line of the diagram D E shows the pressure which is lost after the steam has flown through the contracted passages of the steam pipes and the ports of the engine.

Read more about Thermodynamics or more about engines on our Engine Design page.