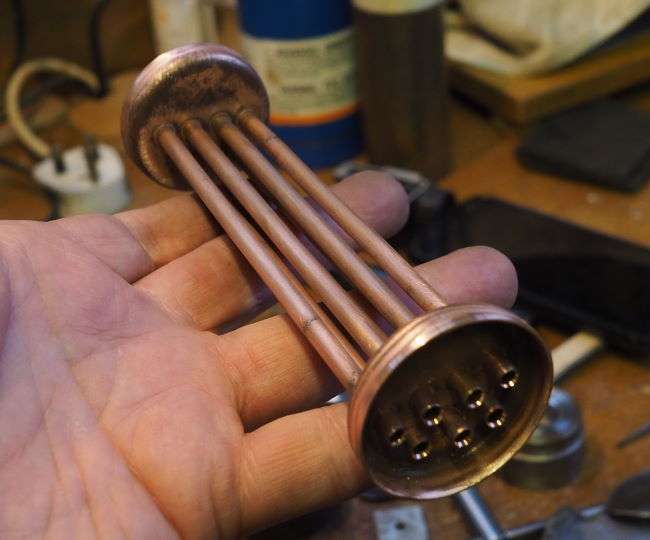 One of my key pages talking about steam boiler design with lists of keywords from A to Z with links to some key articles and useful information.

3 bar litre – one of the limits set by model engineers under which you don’t need a certificate, but you do need to do hydraulic testing.

Ashpan – A container beneath the furnace, catching ash and clinker that falls through the firebars. This may be made of brickwork for a stationary boiler, or steel sheet for a locomotive.

Blow Down Cock – A valve mounted low-down on the boiler, often around the foundation ring, which is used to periodically vent water from the boiler.

Brass Fitting – Should not be used in boilers due to the fact that the zinc in brass leaches out over time, the brass becomes porous.

Bulge – A local distortion or swelling outward caused by internal pressure on a tube wall or boiler shell due to overheating.

Chordal Thermocouple – A thermocouple installed in furnace tubes, designed to measure the effectiveness of water treatment within the boiler.

Cladding – In early practice this was usually wooden strips held by brass bands. Later they used asbestos matting as the insulation covered with rolled steel sheets.

Copper Washers – you can buy copper washers in different thicknesses, thus allowing you to rotate fittings to the correct angle when fitted. It is also quite easy to make soft copper washers.

Crinolines – The framework of hoops used to support cladding over a boiler. Named from the similar hoops under a crinoline skirt.

Dome – A raised location on the top of the main boiler drum, providing a high point from which to collect dry steam, reducing the risk of priming.

Firebar – Replaceable cast-iron bars that form the base of the furnace and support the fire.

Fire Tube Boiler – A boiler where the primary heating surface is tubes with hot gas flowing inside and water outside.

Flue – A large fire tube, either used as the main heating surface in a flued boiler, or used as enlarged firetubes in a locomotive-style boiler where these contain the superheater elements.

Foundation Ring – The base of the firebox, where the inner and outer shells are joined.

Fusible Plug – A threaded metal cylinder with a hole that is sealed with a metal of low melting point that flows away if a pre-determined, high temperature is reached. Invented by Richard Trevithick. The hole is tapered so that the plug cannot be just blown out under high pressure. It is designed to melt when boiler is overheated, releasing a jet of steam into the firebox and alerting the crew.

Gauge Glass – Part of the water level gauge, which normally consists of a vertical glass tube connected top and bottom to the boiler backplate.

Injector – A feedwater pump without moving parts that uses steam pressure and the Bernoulli effect to force feedwater into the boiler, even against its pressure.

Klinger Gauge Glass – A form of gauge glass where the water level is visible through a flat glass window in a strong metal frame, rather than a cylindrical tube. These were popular with some operators, and increasingly so for high pressure boilers.

Manhole – An oval access door into the boiler shell, used for maintenance and cleaning.

Mud Drum – A water drum, particularly one mounted low on the boiler whose function is primarily to trap mud from circulation.

Mudhole – A small manhole, too small for access but used for washing out the boiler, either as an inlet for a water hose or as a drain to remove mud.

Optimum Boiler – is there an ideal boiler design? What is the perfect ratio between volume, surface area, flue area, steam production and fuel consumption?

An idea I need to think about and research

Pressure Relief Valve – A type of valve used to control or limit the pressure in a system or vessel.

Rankine Cycle – A mathematical model that is used to predict the performance of steam engines. The Rankine cycle is an idealised thermodynamic cycle of a heat engine that converts heat into mechanical work. The heat is supplied externally to a closed loop, which usually uses water as the working fluid.

Rocking Grate – An advanced form of firebar. Sections of the grate may be rocked or tipped to either break up clinker within the fire, or to drop the fire after a day′s work.

Safety Valve – An automatic valve used to release excess pressure within the boiler.

Smokebox – An enclosed space at the extremity of a fire-tube boiler, where the exhaust gases from the tubes are combined together and pass to the flue or chimney.

Steam – The gas phase of water.

International Association for the Properties of Water and Steam Properties of water and steam, particularly thermophysical properties and other aspects of high-temperature steam, water and aqueous mixtures that are relevant to thermal power cycles and other industrial applications.

Spirax Sarco A complete set of steam tables is available, consisting of the five regions from sub-saturated water through to superheated steam.

Steam Indicator Diagram –
the pressure in the cylinder is plotted versus the cylinder volume. This was developed by James Watt and John Southern to improve the efficiency of the steam engine. The work done is the area within the red curve.

Steam Point – The temperature at which pure water can exist in equilibrium with water vapour at standard atmospheric pressure.

Steam Quality – The percentage by weight of vapour in a steam and water mixture.

Thermal Insulation of a Boiler – the final boiler thermal design lost around 25W. However, the thickness of the insulation was roughly one third that of the maximum design and hence the thermal conductivity was actually better at around 0.06Wm-1K-1.

Thermodynamics – the study of thermal processes. This is the branch of physics that looks at the relationships between heat and other forms of energy. The thermodynamic relationships are key to our understanding of so many areas of engineering, if not all areas.

Tube Sheet – The portion of a heat exchanger or boiler in to which the tubes are rolled or secured.

Turner Gauge – A device used to measure the actual scale-thickness in boiler tubes.

Water Tube – A boiler tube through which the fluid under pressure flows.

Water Tube Boiler – A boiler whose primary heating surface is composed of many small tubes, filled with water.

Water Wall – A furnace or other wall within a boiler enclosure that is composed of numerous closely set water tubes.