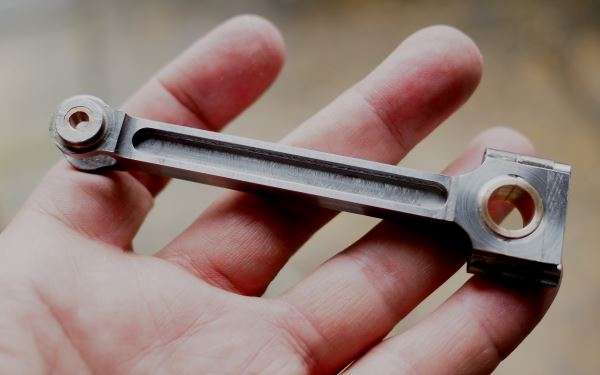 A connecting rod consists of a pin-end, a shank section, and a crank-end. Pin-end and crank-end pinholes at the upper and lower ends are machined to permit accurate fitting of bearings. These holes must be parallel.

Since the connecting rod is continually rotating and translating it experiences both high inertial loads and compressive forces from the combustion pressure applied through the piston.

The conrod mass is mc

The effective mass at the gudgeon pin end is, m1

The effective mass at the crankpin or big end is, m2

Big End – This is the end that connects to the crankpin and has the big end bearing. This will see the maximum forces at engine overspeed. It is important to look at the blending of the big end into the main I-beam section of the conrod.

Connecting Rod Bearing – The bearing located in the large end of the connecting rod by which it is attached to the crankshaft.

For most IC engines the bearing at the small and big end of the conrod will be a plain phosphor bronze bearing. In the small end it would be reamed/machined to size and solid as the gudgeon pin slides through the piston and conrod. For the big end the bearing will be split for muli-cylinder engines.

In the case of single cylinder model engines the conrod is aluminium and a solid phosphor bronze bearing is used for both bearings. There is no need to split the big bearing as the conrod fits onto a single pin crank.

Alignment of the conrod bearings is important as they must be parallel. It is worth checking the alignment using round bars through the big and little ends. This allows the alignment to be checked over a distance that can be measured with a dial caliper over a surface plate.

I-Beam – This is the main cross-section through the beam that connects the little-end and the big-end. The compression load at maximum engine torque can cause buckling of this beam.

Length – As the length between the big and little ends is increased so the side forces on the piston decrease. Overall the effect is the engine efficiency increases as the conrod length is increased.

The relationship between the crankshaft rotation and the piston motion is given by the following equation:

What you can immediately see from this is that the position is a function of the stroke and the conrod length between centres. The acceleration of the piston is important as this allows you to then calculate the inertial forces on the engine.

Increasing the length of the conrod results in more sinusoidal forces from the piston acceleration and deacceleration – hence a smoother running engine. The downside is that the overall result is a taller and heavier engine.

﻿Little End – the gudgeon pin end, the part of the conrod that fits to the piston. The critical design area is the top of the little end in tension when there is no load on the engine and it is running at or above maximum rpm in an overspeed condition. Therefore the width an thickness of the area around the little end should be analysed.

Material – a number of different materials have been used for connecting rods over the years and for different engine applications, the primary choices are:

Piston Pin – a pin that rests in two bored holes in the piston and passes through the eye of the connecting rod, to join the two together flexibly.