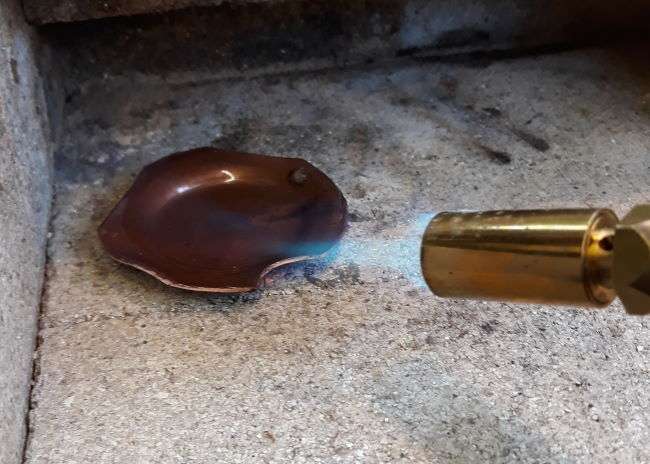 Making a copper boiler end plate with a mild steel pattern and firstly hammering the outer edge over.

I made a mild steel pattern for the copper end plates to be formed over.

The final boiler is for a small traction engine, but firstly I wanted to trial a small vertical boiler with a single flue pip through the middle. The copper tube I have for the boiler is 1.75 inches ID.

the centre hole was machined bog enough to allow the copper plate to be formed in the hole and allow a 15mm pipe to then fit through the hole.

I know that the mild steel former is quite soft, but my intention is to only use this a few times. Four boiler end plates to allow me to make 2 complete boilers would be great.

I heat treated the copper to soften it. this was a simple process of heating it to red heat with a blow torch and then quenching it in cold water. My simple hearth has been useful again.

The resultant boiler end plate has turned out rather well, except for the hammer marks around the edge.

The hammer marks have annoyed me, especially as the centre flue is so smooth around the corner.

The centre worked so well that I decided to make an outer female punch.

As you can see here the first result was rather good. The curve forms well ad the sharp edge on the female punch drawers the copper over the former.

I’m feeling quite pleased with how well this has worked, some simple tips to make a copper boiler end plate:

Not everything goes right first time. I started this one and it felt like it was punching seamlessly, sadly it was just ripping the copper apart.