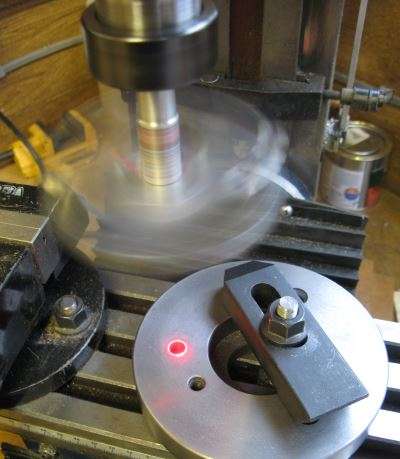 A laser alignment device is great if you want to align a drill press or milling machine to a workpiece.

This started with a pack of lasers that had optics to create a cross-hair image.

My original thought was to fit one of these in a holder in the chuck and then the cross-hair would allow me to align the milling machine.

The problem with this is that it relies on the accurate alignment of the laser in the chuck. Also, these lasers have a focussing lens and a lens in front of that to form the cross-hair image. This means the lens thread has to have no play in it and the lens perfectly aligned – hmmm, not so easy to achieve.

I bought the lasers, lenses and battery boxes from odicforce.com – a great fast service and good prices.

I thought I would search and see how others had made simple laser alignment tools and saw this video (you need to watch from roughly 2min 30s in: youtube.com). This is much easier to build and align. You can see my own youtube video showing how to use this laser alignment tool towards the bottom of this page.

The basic setup is a bar machined down to 12mm (to fit a collet in my case), a piece of aluminium 6-8mm thick, cable ties and the laser module and battery pack.

The bar is a piece of 15mm diameter aluminium 70mm long, machined down to 12mm to fit into a collet.

The bar was drilled one end with a 5mm hole so as to then be tapped 6x1mm metric thread.

A 6mm countersunk allen head bolt was used to secure the plate to the bar. I applied a small amount of thread lock to stop this coming apart.

I used some plumbers PTFE tape around the lens module to stop it moving in the laser module. This keeps it stable and is enough to stop it unwinding when in use.

I machined 3 slots either side of the battery pack to accept cable ties – I have actually only used 2 cable ties.

Having spun the device at speed the cable ties work fine.

The laser module was fitted into a hole drilled on the centreline of the plate at an angle of 20°. I drilled a small hole at an angle first, then I drilled the 12mm hole using a slot drill with a fine feed.

I held the laser module in place with a small amount of thread lock. The module is clear enough of the bottom face to allow me to remove the lens module or just to adjust it to focus the light.

A laser, lens and battery box will cost you roughly £10 plus p&p.

I machined all of the parts in about 2 hours including time to think about dimensions and to design parts.

I actually think that this type of laser alignment device is as good as if not better than the roughly £100 ones that are around with the suppliers at the moment.

I’ve now used this in anger a number of times and it makes a lot of alignment work so much easier. The main image shows me using it to align the holes on the backplate for the Warco WM240b Collet Chuck.

Aligning the rotary table – a simple method to align the rotary table centre with the mill spindle and then to align a part on the table and clamp it down. This is  rather rough and ready approach, but it works to a degree. I’ve then gone on to try a number of different methods and then measured the accuracy using a dial indicator.