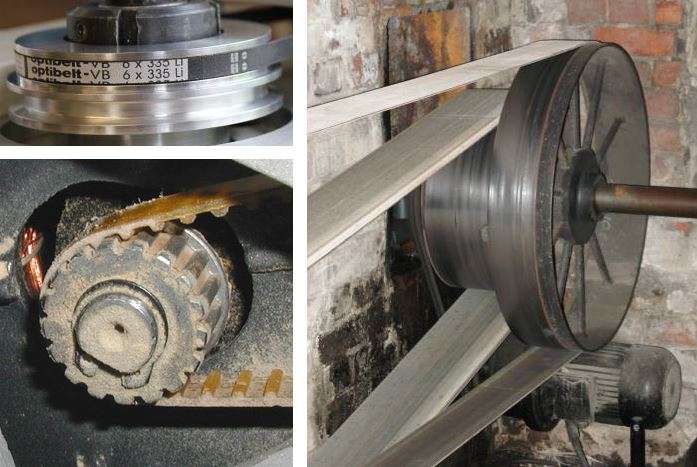 There are a number of ways to transmit power between two shafts, often to enable speed reduction and torque increase, but one of the easiest ways is to use one of the many forms of belt drives. They come in a number of different forms with pro’s and con’s for each dependent on the application.

Flat belts running on smooth wheels, not used so much now, but they can offer really high efficiency.

First came across round belts on the Emco Unimat 3. They work rather well and are quite simple to make pulleys for. Hence I’ve used round belts on my CNC spindle upgrade.

The length of the belt is quite simple to calculate.

Toothed (or Synchronous) belts are always more efficient than V-belt drives, but four considerations preclude them from many applications.

Belt Vibration – this can be transverse and torsional belt vibration (goose noise or whine).

Friction – the friction between the pulley and timing belt can result in a local noise production or the force imparted into the belt that then radiates noise.

Pulley Torsional Vibration – this can be due to a fluctuating torque created by whip in the belt or by a non-uniform tooth spacing that results in a rotational input into the pulley. If the belt is whipping then it might need an idler pulley to support it and/or apply damping to the belt. 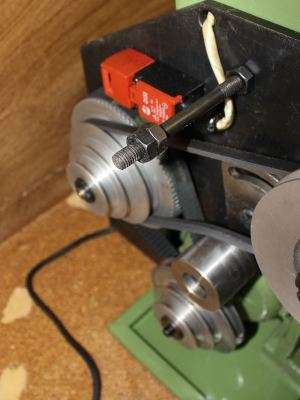 The multiple cone pulleys on the drive system for the Warco WM240B allow a number of spindle speeds to be created from a motor that runs at a single speed. Note the tensioner that does two jobs: 1. allows the belt to be tensioned when the drive pulley locations are fundamentally fixed and 2. pulls the belt such that it wraps further around the pulley and so giving a larger contact area between belt and pulleys. 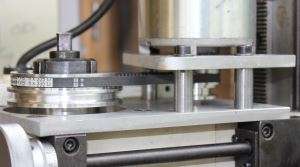 Mini-Mill Belt Conversion – I made this conversion from gear to belt drive for the Mini Mill and it transformed the mill from a very noisey machine that was difficult to use due to the noise levels and the impact that the gear meshing imparts on the milling bits.

The belt is a very small V but was happy transferring 550Watts with a speed ratio of around 2:1