The engine bore and stroke sets the swept volume and with the number of cylinders gives the capacity of the engine. 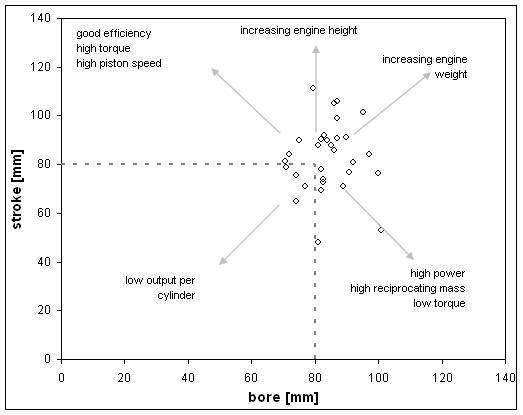 The graph to the right shows a plot of stroke versus bore for a number of fullsize automobile engines.

The ratio of bore to stroke is a good indicator of the engine characteristic such as how high it will rev and basic fuel economy. More simply it also defines some of the basic dimensions of the engine such as height and length.

80mm bore and 80mm stroke would result in a displacement of 402cc. With the bore equal to the stroke this is sometimes referred to as a “square engine”.

A stroke that is greater than the bore is known as a “long stroke” engine. This type of engine will have increased torque and good fuel economy but will not be able to run at high speed. A longer stroke results in an increased mean piston speed for a given engine rpm. The higher the mean piston speed the greater the amount of wear.

If the bore is greater than the stroke then the engine is known as “over square”. This is type of design is used in high performance engines as used in racing cars.

So what does this mean in the case of model IC engines. The following shows another plot of stroke versus bore, but this time for model engines.

The green curve highlights results for engines with a displacement of around 10cc. Over the top I’ve plotted a few different model engines and included both 2 and 4-strokes. The older engines tend to have an increasing stroke to bore ratio – the hit n miss farm engine is quite extreme.

This is actually a useful graph to just pick off the capacity of the engine you are after and you can quickly lookup the bore and stroke.

The smaller capacity engines are towards the bottom left corner. I’ve plotted the OS15LA, a 2.5cc glow engine.

This is all part of our Engine Knowledge series.