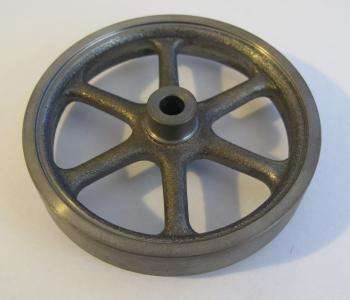 Flywheel design principles, primarily the wheel on the end of the crankshaft that gives the crankshaft momentum to carry the pistons through the compression stroke.

Normally constructed from a heavy steel or iron disc.

A flywheel has two main functions:

The angular acceleration of a flywheel is:

The angular velocity of a flywheel is:

Coefficient of Fluctuation of Energy

This is defined as the maximum fluctuation of energy to the work done per cycle.

Coefficient of Fluctuation of Speed

The ratio of the maximum fluctuation of speed (maximum speed – minimum speed) to the mean speed.

The energy stored in a flywheel is:

If the flywheel is attached to an engine then the energy from the engine per revolution is given as:

The original gearing was done to overcome patent issues: 1781: Sun and planet gear – invented by Boulton and Watt to circumvent the crank patent as they adamantly opposed cross-licensing their condenser technology. Part of the engine development timeline.

Difference between maximum and minimum speeds during a cycle.

The fundamental flywheel design principles are around the inertia that is required to store energy, for an engine this is energy required to continue the rotation between firing strokes, and the minimal inertia that will then allow the engine to rev freely.

Machining a flywheel is actually quite easy with a rotary table and some simple steps.

This particular flywheel is made from cast iron, but mild steel, brass, aluminium are all ok.

The flywheel for the Burrell traction engine took a couple of goes to get it to the right proportions. The original flywheel was too heavy looking at the rim.

I improved the flywheel with a chamfer and curved outer surface. This allowed the weight of the rim to be kept whilst giving a slimmer appearance.