Although practical model jet engines have been around since the early 1980’s it has only been in the past few years that home construction has become viable. Careful design has made simple home construction possible using basic tools and a small centre lathe.

The gas turbine engine shown on the left was made by Ron Lane in collaboration with Howard Denver Designer and Richard Green it starts on gas and runs on kerosene maximum speed 100,000rpm pressure ratio 2:1 and weighs 1.4Kg it has a centrifugal compressor with ceramic bearings.

Much of the current development has happened in Europe with one of the simplest designs so far to come from Germanys Kurt Schreckling. Thomas Kamps also of Germany has produced a design that uses a commercial turbocharger compressor in his construction which speeds up the building. Both of these designs have been published in books in both German and English.

Model jet engines are very quiet when compared with the conventional glow plug two and four stroke engines as used by the majority of model aircraft fliers. These engines are, however, inefficient in the terms of fuel consumption, but the fuels they do use such as petrol-diesel mixtures or propane are a lot cheaper and more readily available compared to the methanol, castor oil and nitro-methane mixes used by glow-plug engines.

Models powered by model gas turbines can use scale size air inlets unlike some ducted fan powered models. This is a definite advantage as many jets do have relatively small air intakes. The engines also have a very high power to weight ratio so model aircraft fitted with them can have high levels of performance if needed. It should be noted that these engines take time to spool up and they still generate thrust when throttled back. Therefore it is imperative that a high level of pilot ability is needed if you hope that your model will survive.

Jet engines in their simplest form, the turbojet, are extremely straightforward in operation. A turbojet consists of a compressor which is driven by a shaft connected to a turbine with a combustion chamber or chambers linking the two. Air is sucked into the engine it is compressed after which it is passed to the combustion chamber where the fuel is burned.

Model engines are small and the time available to heat up the air passing through the combustion chamber is very short. Successful combustion has taken a lot of development effort especially for liquid fuels to be used safely and efficiently.

The combustion chamber must contain and maintain stable combustion despite very high air flow rates. To do so combustors are carefully designed to first mix and ignite the air and fuel, and then mix in more air to complete the combustion process.

The main components of all combustion chambers are: a diffuser, a casing, a liner, a fuel injector and a cooling arrangement.

The air entering the combustion chamber will have a high velocity. It is important to diffuse this air or it will be difficult to maintain the flame.

There are two main types of diffuser:

After the diffuser, the airflow is split up by the liner. One part goes through the region between the liner and the casing – this is called the annulus. The other part enters the mixing chamber, where fuel is injected.

The air flow is split to achieve the correct air-fule ratio and to reduce the flow velocity. The part of the flow that will be ignited has to be slowed down even further.

It is important to ensure the fuel is vaporized before it enters the flame zone so that it combusts correctly.

To get the fuel to vaporise it is first atomised, the fuel should be atomized. To accomplish this, an atomizer is used. To atomize fuel, it has to be given a high relative velocity, with respect to the airflow:

The liner is exposed to high temperatures during the combustion process and as this is continuous it needs to be cooled. The most obvious way is to use the airflow around the liner to do this and to bleed air through into the combustion chamber. 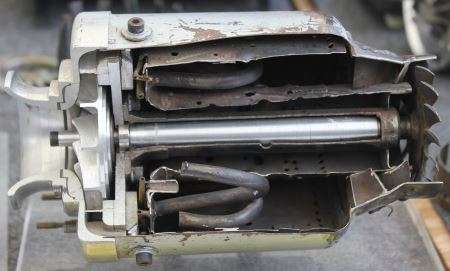 This shows an early gas turbine design, this one made by John Wright.

Over the years the combustion chamber designs have matured and some examples are shown below.