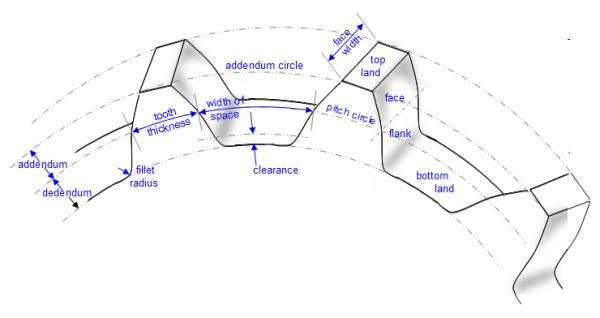 Fundamentally there are a few different gear designs:

There are a number of terms that you will come across and that I’ve listed below to give a basic introduction:

That portion of a gear tooth that extends from the pitch circle to the outside diameter.

All types of cast iron, from gray to ductile, reduce noise because of the inherent damping properties of the metal.

The Fourth Edition of Dudley’s Handbook of Practical Gear Design and Manufacture is the definitive reference guide to gear design, production, and applications. Using a pragmatic approach, the book provides gear manufacturing methods for high-, medium-, and low-volume production.

Two gear teeth are conjugate if they produce uniform motion as they roll together. This is equivalent to saying that one tooth form generates the other as they move. For gears with parallel axes of rotation, the involute profile is most widely used since it has a constant normal load resultant throughout its arc of action and is relatively insensitive to centre distance between the gears. Hypoid gearing is used in most RWD applications since it transmits power for perpendicular, non-intersecting axes. The hypoid gears used in most automotive applications are not involute tooth pairs and the geometry of the gear teeth is not defined on the print. The machine settings used to form the gears are specified instead. The geometric complexity of hypoid gears has historically made it difficult to determine from dimensional checks if the gears would produce noise.

The total or modified contact ratio is usually expressed as a function of the transverse/profile and the face/axialcontact ratios. The contact ratio is the average number of pairs of teeth in contact between two gears. This number can never be less than one for uniform motion gears. The use of helical gears for parallel axis gearing increases the contact ratio and helps distribute the load among more than one tooth pair.

The depth, or that portion of a gear tooth from the pitch circle to root circle of gear.

A plate with evenly spaced holes at a given radius that allow you to rotate a chuck and then hold it precisely at a given number of intervals. This can then be used for gear cutting, machining facets at precise points or for drilling holes in a cylinder end cover for fixings.

For a gear pair that is accurately machined and with roller bearings the efficiency is likely to be 95 to 96%.

This is dependent on the torque that is being transmitted, but as a rough rule of thumb:

Device for the transmission of rotational power that relies on friction between the drive devices to transmit the forces.

I’m sure that there are many excellent treatises on gearing ratio calculation but suspect that most are simply theoretical/mathematical explanations rather than solutions to real-world problems. This article is intended to show a solution to a real problem which initially seemed insurmountable.

The Tellurium – a worked through example of a gear train.

An idler gear may be used between two gears so that the direction of rotation on the two shafts is in the same direction.

The lead of a helical gear tooth is the axial advance resulting from one full revolution of the helix on the cylinder. A spur gear is a special case of helical gear where the lead is infinite. The helix angle is called the spiral angle on hypoid gears.

The best way is to spray oil directly at the point of meshing. The oil is then collected in a sump and from here picked up by the pump. However, where the load is lower one of the gears may dip into the oil. This does lead to greater loss through oil whirl. For gears that are only used intermittently then a grease may be applied to the gears at service intervals.

Non-contact gears that offer a number of advantages over standard gear sets.

Often we need to align gears and then mark that position so that they can be reassembled after servicing.

The image shows two methods of marking gears for alignment.

In practice, gear teeth are designed to accommodate manufacturing errors, misalignments and deflections of gear teeth, supporting bearings and housings, etc. A modification to the theoretical profile and lead is generally specified to optimize conjugate action at the design loads. The modification to the lead also includes a slight crown in the axial direction to avoid high localized stress at the edge of the gear teeth.

This is the pitch circle diameter divided by the number of teeth. For a gear pair the module must be the same.

The addendum, dedendum and depth of the gear teeth are directly related to the Module.

The workshop calculator now has a module calculation page to help with simple sizes and ratios.

The resulting meshing frequency is the product of the number of teeth on a gear and its rotational speed in rev per second. It follows, therefore, that any pair of gears in mesh have the same meshing frequency. See: Gear Noise

The smaller of two mating or meshing gears. Can be either the driving or the driven gear.

Also used to describe a small gear at the end of a long shaft as in Rack and Pinion.

Pitch is the distance between the teeth on a gear. A fine pitch gear has many small teeth and a coarse pitch gear has fewer, larger teeth. An interesting observation is that the stiffness of a gear tooth is not related to the pitch.

The pitch circle is the effective working circle of a gear which would be obtained if a pair of gears were replaced with disks that transmitted the same motion in the same package space through contact friction. The hypoid gears used in conventional axles do not have a true pitch circle since both sliding and rolling occurs at the teeth and the gears could not be replaced with frictional disks.

This is the angle made by the tangent to the gears at the point of contact. If this is not defined then 20° is a good assumption.

The gear tooth profile is the line which defines the tooth shape in a cross-section of the gear perpendicular to the plane of rotation. The profile of a parallel axis gear is an involute (an involute is a spiral generated by a point on a string as it is unwound from a roll).

Gear profile error results in the generation of gear noise at sub-harmonics of the fundamental gear meshing frequency.

A gear with teeth cut around the perimeter that are inline with the shaft on which it rotates.

This is the difference between the actual position of the output gear and the position it would occupy if the gear drive were perfect. This is usually expressed as angular displacement and may be shown as linear displacement at the pitch point. Transmission Error is the primary excitation of gear noise and is dependent on load.

A rotary table and indexing plates is a good way to cut spur gears – gear cutting with the HV4 rotary table.

This shows a setup where I’m cutting 2x 60 tooth gears at the same time out of mild steel.

A gear with helical teeth made to conform with the thread of the mating worm. Worm gears have a sliding action, therefore, large high-load worm gears should be made from phosphor-bronze and the worm from hardened steel.

A worm gear used in the steering system for a traction engine.