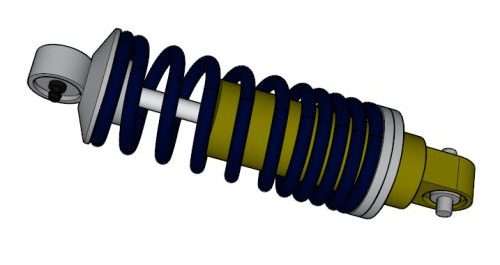 The resistance a mechanical shock absorber develops depends on:

Adjustable Shock Absorbers – Shocks with adjustable bump and rebound characteristics. These can be stiffened to compensate for wear or to fine tune a suspension for a particular application such as rough roads, heavy loads, or racing. Manual types require that you physically make the adjustment from one level to another. Automatic types are controlled by a computer as it senses particular changes in road condition.

Damping Force – The amount of cushioning applied by a shock absorber.

Damping Rate – The amount of cushioning applied by a shock absorber.

Dashpot – A damping device, usually consisting of a cylinder and a piston in which relative motion of either displaces a fluid such as air or oil, resulting in friction.

Double-Tube Shock Absorber – An older design of hydraulic shock absorber using two concentric tubes, one serving as the working cylinder, the other as the reservoir.

Inner Cylinder – The working chamber of a double-tube shock absorber.

Foaming – The formation of bubbles in the oil of a shock absorber.

Friction Shock Absorber – A shock absorber in which friction discs are inserted at the point where the two arms are joined, now no longer used in car suspensions.

Gas Chamber – A pressure chamber of a single-tube shock absorber.

Lever-Type Shock Absorber – A damper operated by a lever arm from a chassis-mounted hydraulic damper unit.

Rebound – The action of a shock absorber to spring back to its fully extended state. The opposite of rebound is bump or jounce.

Single-Tube Shock Absorber – A common type of shock absorber with the working cylinder and reservoir contained in one tube.

Some form of spring is required to support the mass of the vehicle and to return the suspension to it’s nominal position after an event. In horse drawn carts a leaf spring was used to soften the ride. However, without damping this could often be a very bouncy and uncontrolled ride.

The physics of simple springs in their different types, helical and beam forms. The simplest is cantilever beam. There are a lot of applications of springs in everyday life. In our models we employ them to great effect.

Stiction – this is the reluctance of the damper to initially move due to static friction.

Telescopic Shock Absorber – A tubular damper operated by rod and piston, either single or twin-tube. This is the most common type of shock absorber.