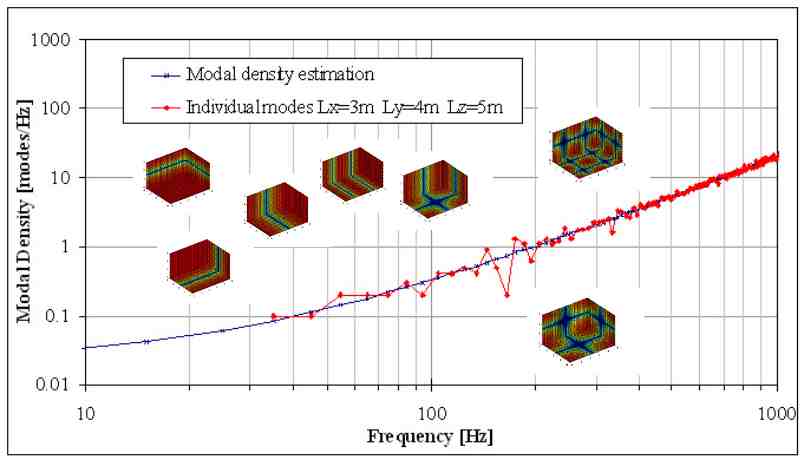 Therefore, the standard modal approach for designing a room with good acoustics is to create as many different resonances as possible, and to spread them as evenly as possible across the frequency spectrum.
The colouration of sound depends on:

Colourations are part of room acoustics and not always bad. They can be controlled to a degree.
The lowest resonance is determined by the largest dimension of the room. (Technically there is also a resonance at zero Hz for all rooms, but this is generally not considered a true resonance).

Where l and m, m and n or l and n are zero look like the following:

In general, the lower the better for the first resonant frequency, because this region is where the frequency response is most variable. Bigger rooms also reduce the spacing between resonances. The limiting factor here is usually cost.

Many methods and optimum room ratios have been suggested over the years to minimise colouration. Essentially these methods try to avoid degenerate modes, where multiple modal frequencies fall within a small bandwidth, and also bandwidths with absences of modes. The assumption being that as music is played in the rooms, the absence or boosting of certain tonal elements will detract from the audio quality.

Cycling through all of the integer values and combinations of nx, ny and nz for a given set of room dimensions Lx, Ly and Lz will result in a complete set of modal frequencies. The number of modes in a given frequency band can be calculated and divided by the bandwidth of the band giving the modal density. The modal density is then plotted against the centre frequency of the band. This may be compared with the statistical modal density.

According to the modal design theory, the worst possible room shape is a cube. The modal density for a 3m x 3m x 3m room is shown above.

The next worst is a room where all dimensions are multiples of the height.

However, neither are as good as the 3m x 4m x 5m room shown here.

As stated earlier, one way to improve the low frequency performance is to increase the dimensions of the room, but maintain the aspect ratio of 3:4:5. The 6m x 8m x 10m room shows a very smooth progression from 20Hz to 1000Hz.