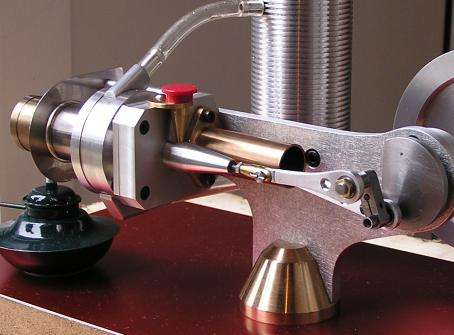 The Stirling engine is an external combustion engine. Also known as a Hot Air Engine.

The Stirling engine was invented in 1816 by a Scotch clergyman, Robert Stirling, as a competing technology to the steam engine.
Stirling engines work by subsequently heating and cooling a gas inside a closed volume. As the gas is heated it expands and as it is cooled it contracts. This expansion and contraction works forces a working piston which in turn drives a crankshaft. A Stirling cycle has two pistons: one that drives the crankshaft known as the power piston and one that moves the gas between the hot and cold ends of a cylinder known as the displacer piston.

There are three basic types of stirling engine:

This has a single power piston arranged coaxially with a displacer piston. The displacer piston does not extract any power from the expanding gas but only serves to move the working gas from the hot heat exchanger to the cold heat exchanger. The main advantages of this engine is that it does not require moving seals in the hot portion of the engine and can achieve high compression ratios due to piston overlap.

This is a Gamma Stirling engine in which the power piston is not mounted coaxially to its displacer piston. The advantage of this design is that it is mechanically simpler and the disadvantage is the lower compression ratio. This design is often used in multi-cylinder Stirling engines.