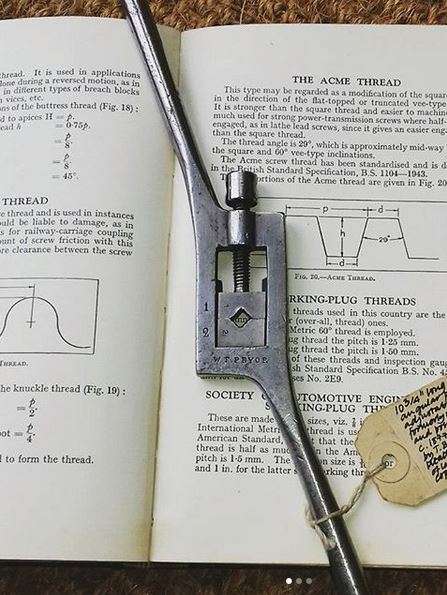 The tap Wrench is a hand tool that can be locked onto the square post on the tap and used to apply a torque to cut an internal thread.

When using a tap wrench it is usual to turn the tap 180° clockwise and then back off in the opposite direction before cutting the next 180°. This allows the tap to clear the swarf.

There are lots of different types of tap wrench available. The most common is a bar with an adjustable square jaw.

Old and New Tap Wrench, very similar in design, just something more elegant and tactile about the older one.

The image at the top of the page shows a tap wrench from the late 19th century that has a separate clamp.

The 2 bars with 2 screws to clamp the bars together and so hold the tap is a touch on the very basic but functional side. I acquired this somewhere along the way in my model engineering career and wish I knew more about it’s origin as it strikes me as an apprentice piece.

I tend to use this bar when none of the others are large enough – this tap wrench will happily hold a 14mm tap.

You do need to select the size of tap wrench for the tap being used.

Too small and it will be difficult to apply enough torque to cut the thread.

Too large and you are likely to break the tap. This takes some time to master, but with small taps eg 6BA or smaller you really want to be able to feel the drag on the tap and gauge when to back off and clear out the cutting debris.

A 3mm tap in aluminium needs a small tap wrench so that you can feel when it’s starting to drag and get clogged.

The T-bar tap wrench is quite common in the cheaper tap and die sets.

Fairly easy to use and compact.

Also, the T-bar tap wrench often has a centre mark in the end opposite the tap so that you can align the tap in the drill / mill.

The tap wrench has a charm, you get used to a certain one and familiar with the weight, inertia and locking mechanism.