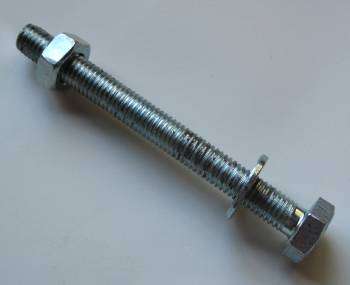 A page about everything nuts and bolts. I’ve tried to list them A to Z, but sorry if I’ve missed something.

Bolt – a cylindrical threaded fastener with a head that is formed to allow torque to be applied.

Nut – A type of hardware fastener with a threaded hole

With regards to different thread forms – see our page on threads and subsequent links to further information.

The distance on a nut from one corner to the opposite corner. The purpose of the AC dimension is to know how large a hole might be needed to insert a recessed nut.

The distance on a nut from one flat surface to the opposite flat surface. This is the size of the wrench needed to install or remove the nut.

A special type of bolt used to attach objects or structures to concrete.

A bolt or screw whose cross section of its head is in the shape of a 12 pointed star.

The torque necessary to put into reverse rotation a bolt that has not been tightened.

The torque required to effect reverse rotation when a pre-stressed threaded assembly is loosened.

A nut that is closed at the threaded end often with a dome.

A nut which fits into a cage and is welded in place. This is done where the nut is not easily accessible.

The collar of the nut is elliptical in cross section and it is this that provides the flexible locking element. The nut is pre-lubricated to reduce the tightening torque. Cleveloc is a registered trade name of Forest Fasteners.

A small rounded head with a square section under the head designed to stop the bolt rotating.

The countersunk allen key bolts in the image are used to mount the chuck to this lathe backplate as that then allows the backplate to mount flush to the lathe spindle.

A bolt with a built in washer on the head.

A nut with a built in washer to spread the load.

A nut with a plain internal thread and hexagonal in shape.

This can be either a second nut that is tightened against the first nut or a nut that has some form of system that prevents the nut from coming loose with vibration, eg Cleveloc or Nyloc. Sometimes called a Jam Nut.

This is the nut we’re all familiar with – 6 sides.

This term is used for the completion of maintenance work on a bolted joint when the joint is under load.

Bolt with a plain hexagonal head.

A nut with an elastic ring that grips the bolt and stops he tendancy for the nut to vibrate loose.

The process of pulling parts of a joint together, most of the input turn during this process is absorbed in the joint with little tension being given to the bolt.

The torque required to pull plates together so that direct contact occurs. Often used in angle control tightening.

Fastened with a hexagonal Allen key.

As per the title, a plain thread square nut.

A bolt with a fixed square head that fits into the T-slot of a bed on a milling machine.

A U-shaped, bent iron bar that has bolts and threads at both ends.

Used to distribute load under a nut or bolt locking surface.

A nut with wings that allow it to be tightened and released using fingers.