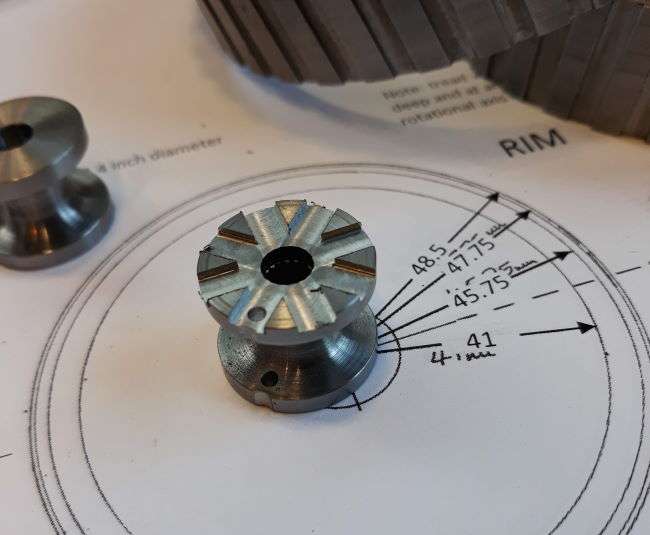 The rear wheel hubs for the miniature traction engine that I’m making need to be indexed with eight spokes each side of a single wheel. The trick is that the spokes are out of “phase” and so the hub needs to have this out of phase feature. This post talks about how I went about aligning and machining the hubs.

The hub blanks were machined from mild steel on the Warco WM240B.

However, the glanze circular lathe tool by nature has a large cutting length and so I ended up with chatter marks.

So, I went back to basics and looked back at my lessons learnt about reducing chatter.

The tool overhang from the saddle has been reduced to a minimum and the part has been supported with a centre in the tailstock. The tailstock was also locked off to improve the rigidity of the rotating parts.

The machined hub blanks sitting on the drawings with the wheel rims.

In order that I can machine the 8 slots each side of the hubs I needed fix the hub to the rotary table. Even more than just fixing I needed to centre it and have some feature to allow me to align it.

Hence this mild steel mandrel with a short MT2 taper. The angle was set on the lathe top slide and then I machined the taper until I achieve the correct diameter at the upper shoulder.

The mandrel in the rotary table (HV4). You can now see the 6mm reamed hole through the centre that allows me to align the hub using a 6mm axle.

The small offset hole was drilled through the first hub that I machined the 8 slots in as a feature to allow me to rotate and align the other side.

The first hub machined with 8 slots on one side. As clearly shown, the small 2mm diameter hole was drilled right the way through the hub.

In the next image you can see me using a 2mm drill bit to align the hub to the offset hole.

I had to be very careful not to move the mandrel, the MT2 taper held very well in the rotary table.

Once the hub was aligned with the drill bit I then rotated the hub using the indexing plates 1/16th of a rotation. This rotation then meant that the slots in the opposite side were out of phase with those on the opposite face.

The long T-nuts are used to clamp the hub down, it being aligned centrally with a 6mm axle and angle with the 2mm drill. Aluminium offcuts are used to protect the hubs from the clamps.

A small 4mm slot drill being used at 2000rpm to machine the slots.

The pair of rear wheel hubs interlocked and with a 2mm drill through the alignment hole. This photograph was just taken to show the resultant machining accuracy.