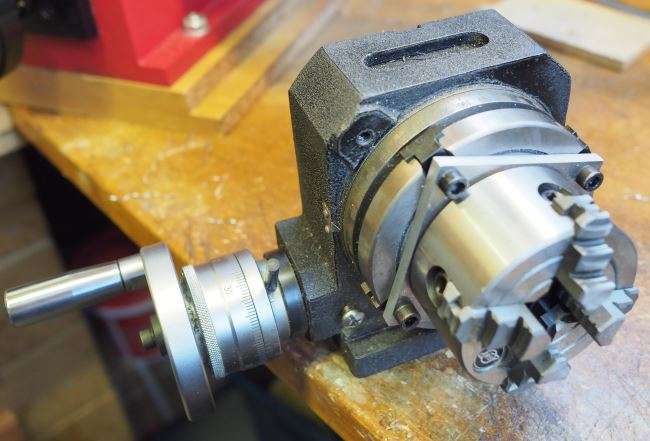 4-Jaw Chuck on Rotary Table or perhaps more accurately: “Mounting a 4-jaw Chuck to a Rotary Table in the Simplest Way”. The simplest way is the part for me.

I’ve had a small 80mm 4-jaw chuck hanging around my workshop for some time with the intention of either mounting it to the Hobbymat Lathe or to a rotary table. 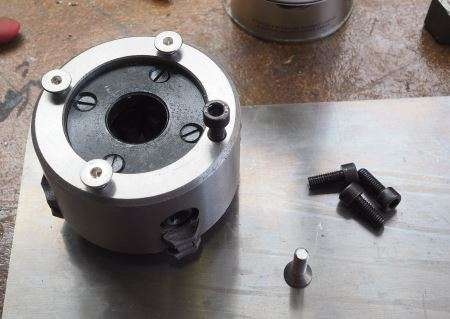 The rotary table is a Warco HV4 – this is 110mm in diameter and so much larger than the 4-jaw chuck I have laying around.

I thought about buying a cast iron backplate and machining this to fit the chuck and rotary table, but that did feel like overkill and would result in the chuck standing out even further from the table.

Then I saw a piece of 6mm thick aluminium plate, this would work if I use countersunk bolts to fix the chuck to the plate. 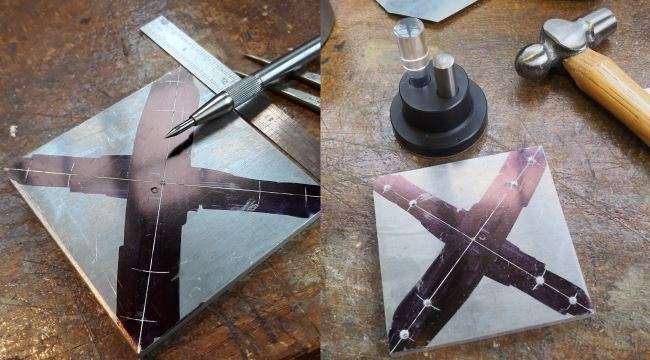 The plate was cut out, machined and then marked out ready for machining – the optical centre punch is a great addition to any workshop. 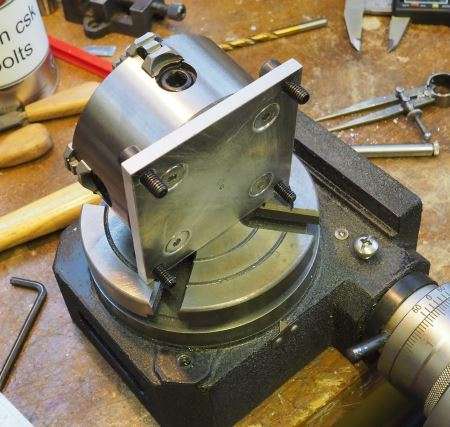 The chuck bolted to the backplate and now resting on the rotary table.

The bolts fixing the chuck to the backplate are 6mm stainless countersunk. I made the countersink in the plate slightly deeper than normal so that the bolt heads were below the surface once tightened.

This rotary table has four T-slots and so very conveniently a square plate with a fixing bolt in each corner works very well. 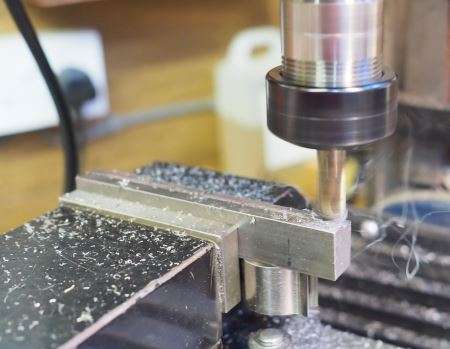 My only problem at this point was that I didn’t have any T-nuts for the rotary table.

The first task was to machine a length of 18mm wide mild steel into a T-bar slab.

I set the mild steep up in the vice and carefully set the depth of the T and locked the axis off.

Then I could just machine the whole slab of T-nuts down one side to a depth, turn the bar over and repeat the process.

This gave me an accurate T-section – important if you don’t want the nuts to load one side of the T-slot more the other. 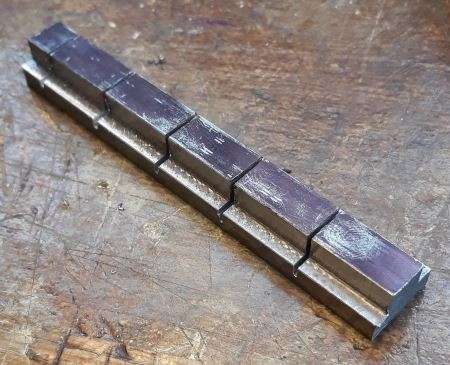 The T-bar was then cut into 20mm long pieces that I could then machine back to 18mm long to create square T-nuts. The black on the top of the bar is permanent marker that I use for marking out.

The ends of the T-nuts were turned by holding them in a four-jaw chuck on the lathe.

I tend to go into process world and machine each end square and flat first. Once that is complete I then measure the length of each and replace in the chuck to then machine them down to 18mm long. 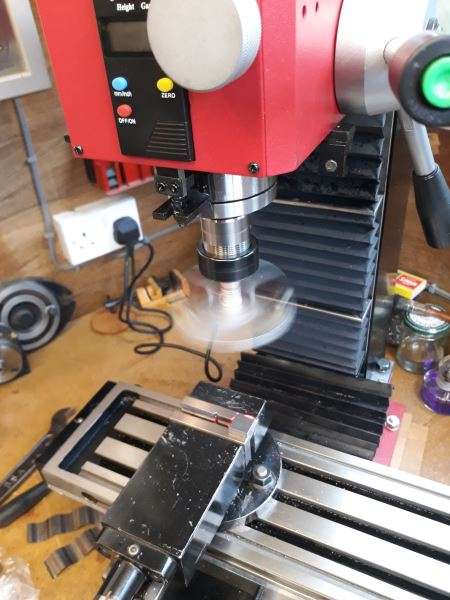 Finding the centre of the T-nut with a homemade laser finder – the nut was aligned with the edge of the vice so that I could quickly setup each of the nuts for drilling.

I set the laser at the correct height and as the nuts are square I adjusted the X and Y axes until the laser just kissed the four corners.

Sadly the laser finder doesn’t photograph too well as the digital image is a snapshot, but the laser traces a line and at around 200rpm this line is continuous.

After alignment I centre drilled each nut from the back, then used a 4mm drill before finally using a 5mm drill that is just right for the 6mm tap. 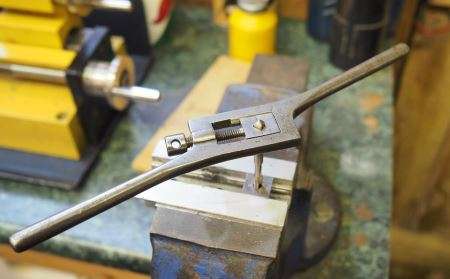 The nuts were then threaded 6mmx1mm – here using a tap wrench that is around 120 years old – a joy to use. The offset clamp is very positive.

Mild steel, a small amount of cutting oil and modern taps mean that you can nearly wind the tap through the thickness of the nut in one go. I tend to break the chip after a few turns to make it a bit easier and to ensure it doesn’t lock out. 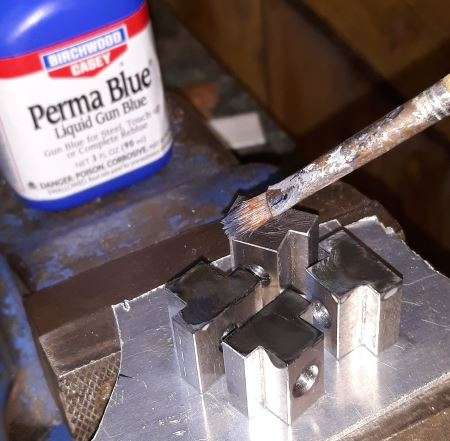 The nuts were then turned black using Liquid Gun Blue – this works great if you apply it with a brush to a clean, grease free surface.

Best to clean the metal with soap and water first before then using methylated spirits as a final removal of any grease.

After using the liquid gun blue it is best to clean the nuts again before applying oil – the oil brings up the clean black finish. 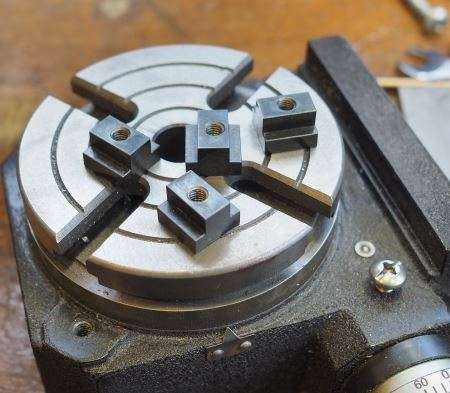 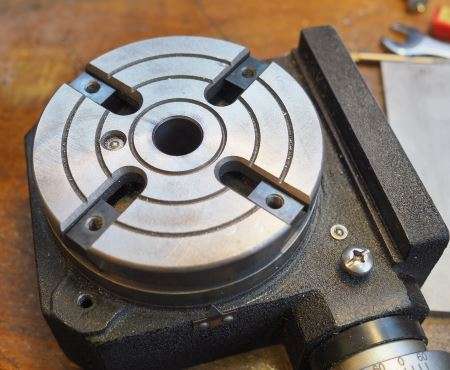