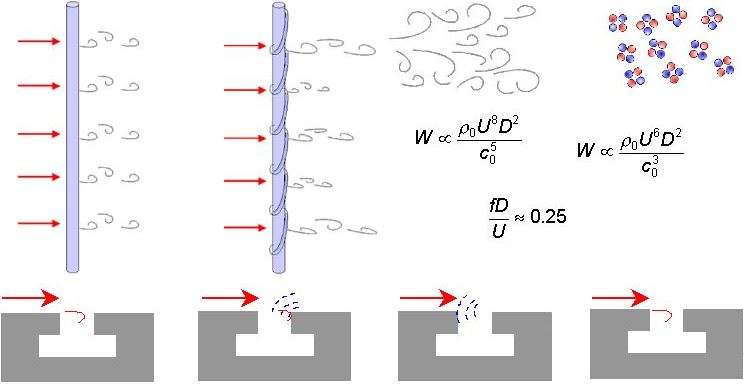 When we flow gas through a pipe or over a surface (fluid dynamics) we generate noise and sometimes vibration, this all falls under the title of aerodynamic noise. The noise that is produced can be extreme if there is a feedback system between the noise that is generated and the gas flow. However, even under normal flow circumstances it is worth understanding the basics and how you can reduce the noise produced.

Sound generated by turbulent flow is just as if the field were generated by a distribution of quadrupole sources (Reference: Lighthill paper from 1952).

This mathematical description by Lighthill was a big step and requires a good understanding of acoustics and fluid dynamics to fully appreciate, but the next paragraph sums this up nicely.

Lighthill rearranged the basic equations of fluid dynamics to show this exact analogy. The frequency content is roughly determined by the length scale and velocity of hydrodynamic disturbances, e.g. consider a cylinder in an airstream.

Pure jet mixing scaling law – assuming that the sound field is generated by a distribution of quadrupole sources, and assuming the typical frequency of the sound is proportional to the velocity divided by the fundamental dimension shows that the sound power radiated by a compact, unheated jet at low Mach number increases by 24 dB for every doubling of jet velocity.

The diameter of an exhaust pipe needs to be kept small as this then maximises the attenuation of the expansion chamber (silencer volume), but a smaller diameter pipe will result in higher flow velocity and using the relationship above we see the sound power is proportional to the 8th power of this velocity. This balance of attenuation to flow noise is really important with regards to the exhaust tailpipe as this controls the exhaust gas exit velocity and how well the last silencer attenuates the sound.

Fan noise is generated by a number of different mechanisms, one of which is flow over the fan blades and over supporting struts. From the above scaling law we can see that reducing the air flow velocity has a significant impact on reducing noise. Hence making the fan the largest diameter possible and then reducing the rotational speed is one of the most significant things to do.

As shown earlier, when we flow air over a body we are likely to generate vortices behind the object.

This vortex shedding can result in the production of whistles such as around car aerials or even structural damage as in the case of tall chimneys. This problem can be reduced dramatically by wrapping a helical strake around the cylinder.

One special case is where there is flow over an open cavity, eg the open sunroof in a car. Tonal noise can be emitted by cavity flows. This is caused by feedback of sound from vortices impinging on the downstream edge back to the upstream edge, causing the formation of another vortex.

The flow and the sound field become locked together and intense single frequency sound is often produced. A similar effect is produced by flow excited Helmholtz resonator. A rough guide suggests that ‘singing’ will occur in a Helmholtz resonator when the strouhal number is 0.25 or a multiple thereof.

The flow acoustic coupling can be reduced by adding castellations to the leading edge as shown in the following diagram to the left. The effect of using castellations is to produce turbulence with different length scales and hence a less constructive sound field will result. This is the same basic idea as wrapping a helical coil around a pole or chimney.

I’ve tried to cover the many different forms of aerodynamic noise and there are many examples where you can apply this basic knowledge to improve the design of a component.