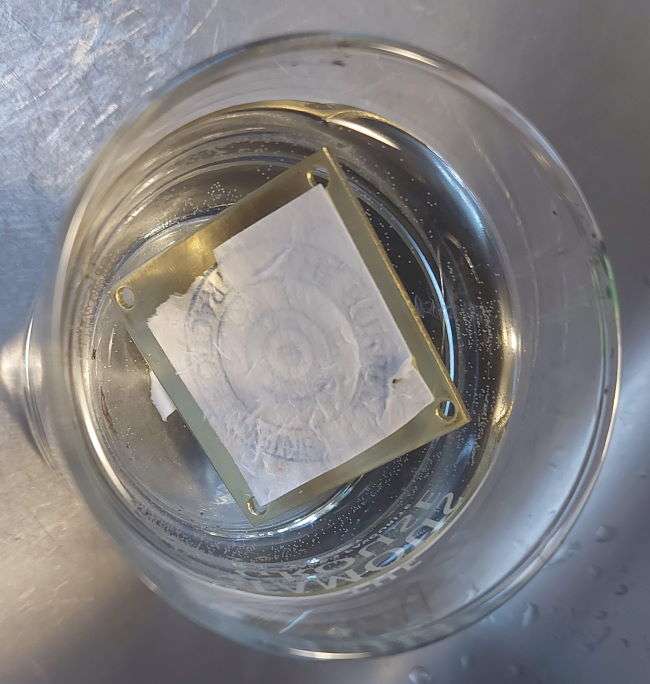 In the model engineering workshop we drink it, either as water from the tap or endless cups of tea, quench parts in it, clean items (main image shows paper backing of transfer being washed away), cool engines, dilute cutting fluid and use it as a working fluid in steam engines.

Water is distinguished from other common terrestrial substances in existing in all three phases at atmospheric temperatures and pressures.

The fundamental properties of water are listed below:

Water is the only substance that expands on freezing as well as by heating and has a maximum density at 4°C.

A compound with all water removed, especially water of hydration.

Atmometer – an instrument for measuring the rate at which water evaporates, also called an evaporimeter.

Brakish Water – water having less salt than sea water, but undrinkable, having salinity values ranging from about 0.5 to 17 parts per thousand.

Drinking Water – water of sufficiently high quality that it can be consumed or used without risk of immediate or long term harm.

Hardness – water contaminated with compounds of calcium and magnesium. Dissolved iron, manganese, and strontium compounds can also contribute to the “total hardness” of the water, which is usually expressed as ppm CaCO3. Water with a hardness over 80 ppm CaCO3 is often treated with water softeners, since hard water produces scale in hot water pipes and boilers and lowers the effectiveness of detergents.

Hydrophilic – a polar molecule or group that can form strong hydrogen bonds with water.

Hydrophobic – a nonpolar molecule or group that has little affinity for water. Hydrophobic groups on molecules in solution tend to turn in on themselves or clump together with other hydrophobic groups because they are unable to disrupt the network of strong hydrogen bonds in the water around them.

Able to absorb moisture from air.

Example: sodium hydroxide pellets are so hygroscopic that they dissolve in the water they absorb from the air.

Cloud condensation nuclei are typically hygroscopic, consisting of salts that produce aqueous solutions that have equilibrium vapour pressures less than those for pure water at the same temperature.

Formed when water is cooled below its freezing point.

Ice Point – the temperature at which pure ice can exist in equilibrium with water at standard atmospheric pressure.

Steam – the gas phase of water.

Steam Point – the temperature at which pure water can exist in equilibrium with water vapour at standard atmospheric pressure.

Steam Quality – the percentage by weight of vapour in a steam and water mixture.

Temporary Hardness – the component of total water hardness that can be removed by boiling the water.

Triple Point – the temperature at which solid, liquid and vapour can exist together in equilibrium. For water this temperature is 273.16K

Banging of pipes caused by the shock of closing valves – eg taps.

Occurs in a closed piping system as a result of the pressure being rapidly increased when the liquid velocity is suddenly increased.

This damaging effect is usually the result of sudden starting, stopping, change in pump speed, or the sudden opening or closing of a valve. Water hammer can usually be controlled by regulating the valve closure time, surge chambers, relief valves or other means.

Hopefully this has given a taster for the properties of water and for some of the terminology. This cannot cover everything as this is such a huge subject. However, I will add further references, notes and useful resources over time.