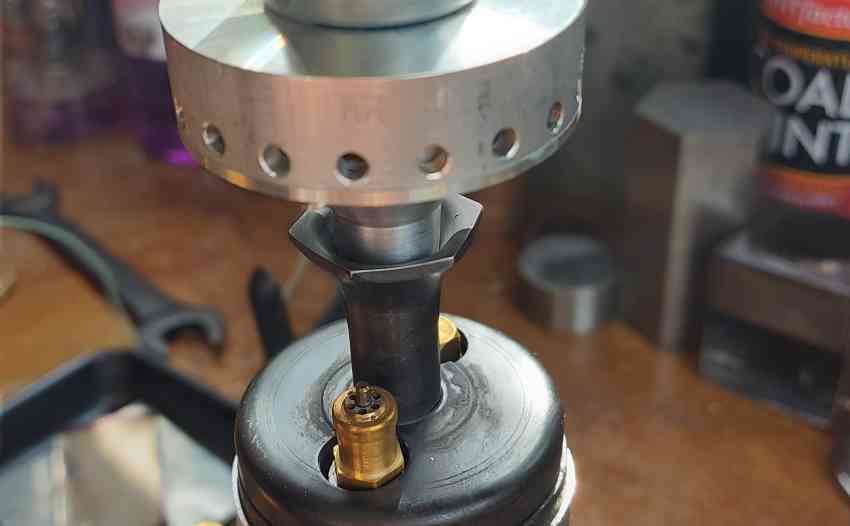 Here I’m going to have a look at a couple of designs for steam raising blowers. I’ve made these for the small vertical boiler. What I didn’t realise was the effect they would have on the heat output of the burner, we will come to that later.

I took inspiration for the aluminium fan I was going to make from the Black & Decker fan out of a broken hot air gun. This is a centrifugal fan made from plastic.

My challenge was to make a similar fan blade from aluminium. in particular from the offcuts I had laying around the workshop.

The motor was also from the hot air gun. However, it had a serrated shaft that the original plastic fan was pushed onto. I needed something different to fit the aluminium fan to.

Hence I made a brass shaft that I pushed onto the shaft as an interference fit. I then machined the brass shaft on the motor.

Once I had made a case for the fan I then had a steam raising blower.

The motor was happily running and moving quite a volume of air at 6V and around 0.5A. This could be pushed up to 12V for short bursts.

This fan had a significant effect on the heat output of the burner and hence temperature rise of the boiler. Later in this article I will show a comparison.

The other way to move a volume of air through the boiler flue is to introduce a jet of steam. Or at startup a jet of air.

Here we have a 1/16″ OD copper pipe connected to a small air pump using a silicon pipe.

The pipe is placed in the top of the chimney and so the u-bend section sits roughly halfway along the flue.

Compressed air through this narrow pipe produces a jet of air.

The qualitative behavior that is usually labeled with the term “Bernoulli effect” is the lowering of fluid pressure in regions where the flow velocity is increased.

The low pressure area is filled with the high pressure area below. Thus the air from the fire box is pulled into the flue. The high velocity jet also entrains the exhaust gas around it in the flue accelerating that too. In this way a high pressure jet of air can be volume amplified by up to a factor of 25.

I compared both of these systems on the small vertical boiler and back to back. The instrumentation was as per the original measurement setup.

In the chart you can see the initial rate of climb in temperature before the blower is switched on. In the mid-section, around 180 to 230 seconds, I turned both blowers off momentarily before then switching them back on. Note that the electric fan was removed from the chimney when it was turned off. Both blowers were switched off when the temperature got above 140°C as this is then close to the 50psi safety valve limit.

Note 1. I updated the latest model with a new cool down curve for this configuration. I then calculated the heat output for each case and there was a substantial increase over my original estimate.