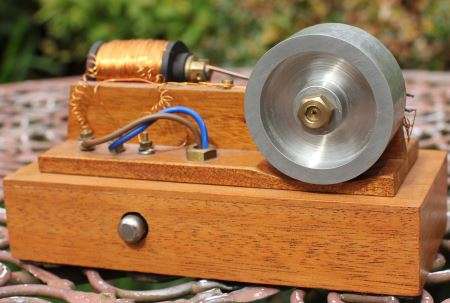 The image shows a pewter flywheel on a solenoid engine. The outer surface has a hammered finish.

Traditionally pewter is an alloy containing 80% tin and 20% lead. Modern pewter is 85 to 95% tin with the remainder consisting of copper, antimony, bismuth.

If you just want to cast a rough shape then it is easy to form a mould using wood and then pour the molten metal into the cavity. This is best done outside as the wood will burn and smoke. A second pouring will most likely be more successful as a surface of carbon will have been formed.

Remember that you will need to cut draught angles on the mould so that the part can be released.

Pewter turns very well and is probably most similar to a very soft aluminium. Be careful as the tool can dig in, so best to take small cuts. Remember that the swarf is useful as you can melt it back down and once again cast into a shape.

Perhaps less about machining pewter buttons and more about holding them so we could. The pewter buttons have been cast in an open one-sided sand mold. The stars on the front face are the important face to keep. The open casting means the thicknesses are variable.

The big issue was there was no easy way to hold them as pewter is quite soft.