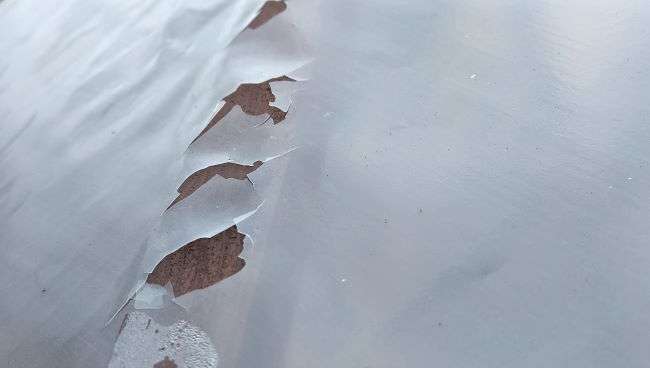 When I built my dome greenhouse earlier this year I took my time reading about coverings, so how did I end up with brittle greenhouse polythene? The greenhouse covering looked rather good when it was first complete.

I had bought Allplas 500 polythene, recommended for small greenhouses and UV resistant.

Clear Polythene sheeting 2m wide with many lengths to choose from ideal for many outdoor applications, UV Stabilised and should last 5 seasons in the UK

This UVI Sheeting is 500 gauge and has great properties to help with the longevity of the product.

So what had gone wrong for this polythene sheeting to fail after just one summer?

The polythene covering first started failing on the dome, cracking was most pronounced where the covering was on top of beams.

It might be the wood treatment that reacted with the polythene to speed the process up. However, the plastic around the back of the greenhouse has remained flexible even where it overlaps the wooden frame. Also, the lower frame was treated last and so I would expect the polythene covering this area to have failed first. But it was the dome that failed first.

My conclusion is that the Allplas UV polythene is just not UV protected and certainly not able to withstand 5 years, it barely lasted 2 seasons. This is a very brittle greenhouse polythene.

Just a quick look at altenatives: