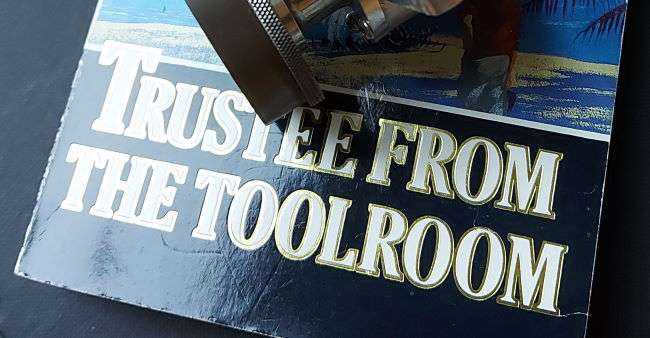 “Trustee from the Toolroom” by Nevil Shute was first published in 1960.

Keith Stewart is an ordinary man. However, one day he is called upon to undertake an extraordinary task. When his sister’s boat is wrecked in the Pacific, he becomes trustee for his little niece. In order to save her from destitution he has to embark on a 2,000 mile voyage in a small yacht in inhospitable waters. His adventures and the colourful characters he meets on his journey make this book a marvellous tale of courage and friendship.

This is a lovely calm and gentle read of engineering and adventure. The inclusion of model engineering skills and the description of some of the models is a real insight into this hobby and particularly resonated with me.

The main character, Keith Stewart has a workshop with the following tools listed:

Keith takes one of his models on his travels. The model in question is a small four-stroke.

He had evolved a little six-volt generator no more than an inch and a half in diameter running at three thousand revs. For research purposes he had adapted the basic castings of his Hornet engine to make a new four-stroke 7-cc. engine running on petrol with a little carburetor, and in place of the reduction gear he had fitted a governor; ignition was by a tiny magneto of his own design and a miniature sparking plug. The whole lot mounted on a little baseplate was about four inches long, two inches wide, and two and a half inches high.

Trustee from the Toolroom, Nevil Shute

The following section still gives me hope for this marvelous hobby:

he wrote about them weekly for the Miniature Mechanic, a magazine with a considerable circulation in the lower ranks of industry and with a growing popularity amongst eccentric doctors, stockbrokers, and bank managers who just liked engineering but didn’t know much about it.

Trustee from the Toolroom, Nevil Shute

There is still a real interest in model engineering and I can see this in the comments I get from all of the forums and social media spaces. The maker spaces are taking home engineering to another level, is it time that we mix this all up and reset what we mean by model engineering.

I finish with this quote that is on the front page of the book:

An engineer is a man who can do for five bob what any bloody fool can do for a quid.

origin unknown, five bob is equal to 25p and quid is slang for a pound