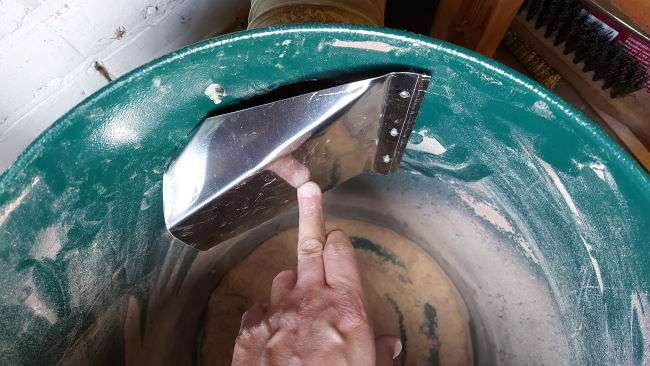 I thought I would try and create a Record Power DX1000 Cyclone dust collector. This DX1000 dust collector has been in use in my workshop for a number of years and works very well, but there is a tendency for a lot of the dust and particles to clog the filter.

The standard DX1000 is a metal bin with the inlet duct at 90° to the surface of the drum collector.

My idea was to simply turn the air on entering so it would have a tendency to run tangential to the inside surface. Thus creating a rotating airflow that would drop the dust out into the bottom of the drum.

The duct was cut from a piece of 1mm thick stainless steel. An offcut from an old cooker hood.

I created an edge for the bolts in the stainless steel, a slight bend meant I could get a flat surface about 15mm wide.

The angled bend then creates the top surface and pushes the duct off the internal surface of the drum.

I used the existing duct bolts as I didn’t want to create additional holes in the drum.

Close up of the duct. Turning the air so abruptly will increase the back pressure and it would be better turn the whole inlet duct to run tangential. However, this is meant to be a simple modification that gets me 80% of the effect without too much work.

The actual airflow looks rather good based on the patterns created inside the drum. You can see evidence of a swirling motion. I will have to run this for longer to see the impact on the filter. Early indications are my Record Power DX1000 Cyclone modification works.