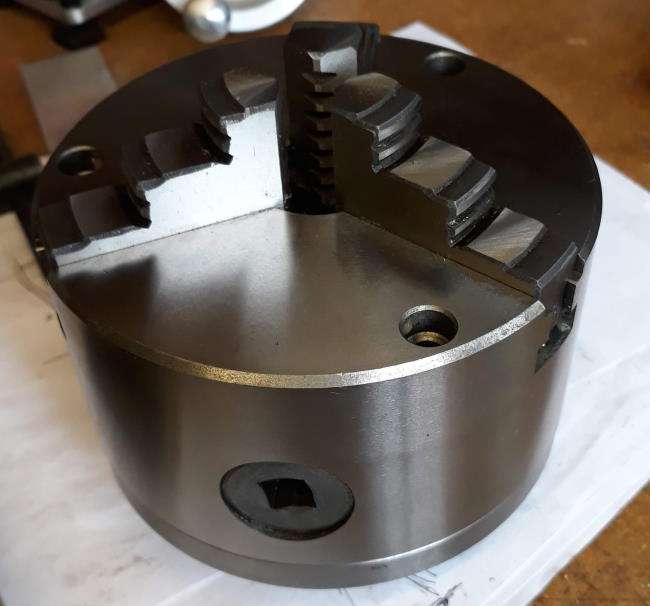 After living with the runout on my Warco WM240B 3-Jaw for some time I decided to replace the chuck with a 125mm Soba 3-Jaw Lathe Chuck. The replacement of the chuck was a fairly easy process. However, you need some patience and time to get the backplate right.

After searching the internet I ordered the 125mm Soba chuck from Chronos Tools. The chuck and a cast iron backplate arrived promptly. First impressions on unpacking were very good, the jaws were deep and the teeth machined into them were crisp.

The backplate from the old chuck fits the new chuck, ok with a slight amount of movement of around 0.025mm.

One of the first checks was to measure the runout of the lathe spindle.

Here you can see the setup with the digital dial gauge to measure the radial runout. I also measured the axial runout.

This is a tiny runout and nearly down to surface roughness.

Setting up the Backplate in a 4-Jaw Chuck

As the old backplate from the original 3-jaw chuck was so close to fitting I decided to initially try and use it.

Therefore, the first job was to set it up accurately in the independent 4-jaw chuck.

This had to be accurate and after initially using a digital dial gauge I swapped to a dial test inidicator and kept going around and around until the needle just vibrated with the surface roughness.

Facing and Boring the Backplate

I faced the backplate and removed 4mm in thickness.

I then bored the centre as the 4mm removed from the face would now allow more material to engage with the spindle.

I left the original bored centre and extended the bore with a slight 2° taper. This would give a good engagement on the spindle.

This Soba chuck is meant to be front mounted with long caphead bolts. However, as I didn’t have these long bolts I wondered about mounting it from the back using 8mm short capheads. This meant I needed to tap the chuck. As the chuck is made from cast iron, how hard can this be?

As the backplate had been thinned down I didn’t have that much depth for the heads of the bolts.

This slimmed down head would now sit below the surface of the backplate.

And finally the runout with this chuck:

The runout measurements are not definitive, the stock is rather random in quality and the faces may not be square for the 100mm stock. However, I’m very pleased with this Soba 3-Jaw lathe chuck and will let you know in a few weeks how well I get on with it.

A simple way of reducing runout on 3-jaw chucks when machining bar stock.

Mark one of the jaws and the bar as shown.