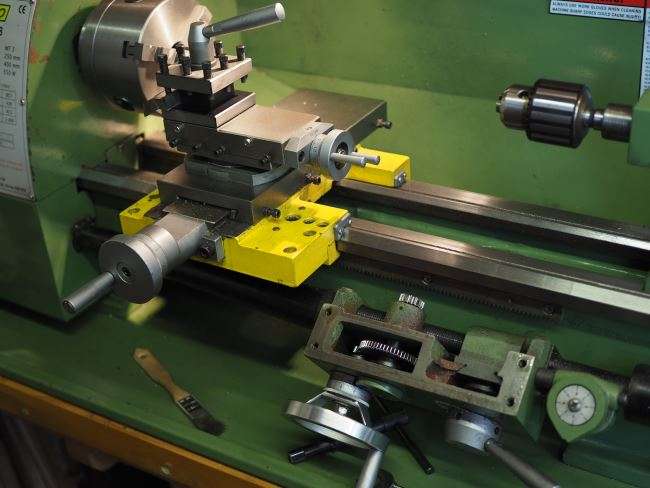 I’ve had a Warco WM240b for a number of years, but in the last few days the main carriage has been developing noticeable play. The obvious sign was that I would make a cut and the tool would make another cut as I backed off.

My first port of call was to look at an exploded view of the Warco WM240b carriage. This drawing is available in the manual and you can easily find this online as a pdf. This drawing is for the WM180 and the immediate difference you will find on the WM240B is that the clamping plate (numbered 239) at the front of the carriage is actually in two parts.

The clamping plates at the front are difficult to access and so my approach was to drop the saddle.

The saddle is fixed to the carriage with 4 off caphead bolts.

The saddle rotates and hangs on the leadscrew once all of the bolts are free. You can now see the reduction gears for the handwheel, but access is still limited.

However, once the saddle and carriage are free from each other you can move them apart and so gain access to the underside of the carriage and the clamping plates.

At this point you will see that the font clamping plate does not have any screws to adjust, the drawing in the manuals is wrong.

The two clamping blocks from the front of the carriage. There are two smaller caphead bolts in each to fix them to the carriage. The only adjustment is by filing the mating and sliding surfaces of the blocks.

This means it’s just not that easy to get this adjusted.

The locking of the saddle onto the lathe bed is achieved by a large bolt that operates on one end of the longer clamping plate and bends the clamp to lock the saddle – this is quite horrible. The slot is to allow this block to bend more easily.

Working the block on the diamond pad to remove the high point takes some time and I found it best to centre my thumb pressure on this area.

Also, you can see that I’ve bolted the saddle back onto the carriage and I was using a think piece of aluminium (~1mm thick x 15mm wide and 80mm long) to support the clamping block when removing and replacing it.

Next to the saddle itself and so back to the diagrams in the manual.

In the manual the second shaft with the large and small gears appears to be one part, in reality this appears to be two parts with the larger gear being fixed to the axle of the smaller gear with a grub screw. This makes sense as this would be the only way to make and assembly it.

The saddle is a crude cast iron with a gear reduction between the handle and the rack. The gear that engages with the rack appears to be suffering and this might have to be replaced at some point in the future.

The bearings for the two shafts are machined and appear to be a push fit into the casting. I’ve circled in red where the bearing on the main handle shaft has started to work it’s way out of the casting.

The larger of the gears is fixed to the second shaft using a small grub screw. This was the first time I had taken the saddle apart and inspected it and this grub screw was loose.

Tightening this grub screw reduced the play between the handle and the saddle movement considerably.

The adjustment at the back of the carriage is better as this a gib and 4 off caphead bolts each with a locking nut. These need careful adjustment as you want to remove any slack, but not over tighten.

As a finishing note: the saddle is actually rather simple and worth being brave and taking it apart to ensure that everything is tight and fit for purpose. I do need to have another think about the saddle locking mechanism as this really isn’t fit for purpose.