Lamp Post Engine, looks like a lamp post with an engine built onto it or that was the original intention. Since making it I have kept thinking about adding a light fitting to the top and maybe driving it off a generator attached to the flywheel. 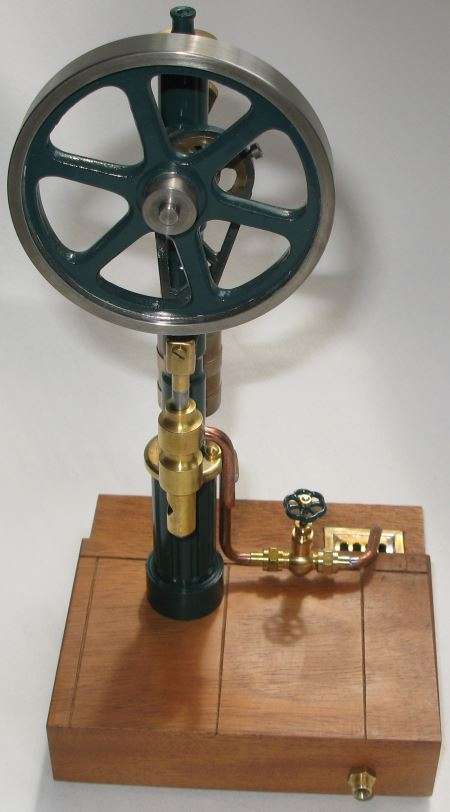 How many hours do you spend browsing through the internet looking for inspiration for a new model? Lots of different steam engines and one in particular caught my eye Bodkin 2, what a lovely looking engine. This engine was made by Ben Peake.

Ben′s site is nolonger online, but if you search for “Ben Peake engines” you will get lot’s of images of the engines he has made . Time to stop browsing and off to the drawing board….

The flywheel casting is the 3.5″ Stuart Turner one as used on the Stuart 10V engine. As you can see, I machined the flywheel down to a diameter 77.5mm and width of 10mm.

Also, I machined the spokes thinner as well as the rim.

I wanted this to look like a lamp post and so that′s what I machined from steel in two parts.

The base is 20mm diameter and so roughly 60mm in circumference, with a 3mm bullnose end mill this would mean I needed 10 flutes. 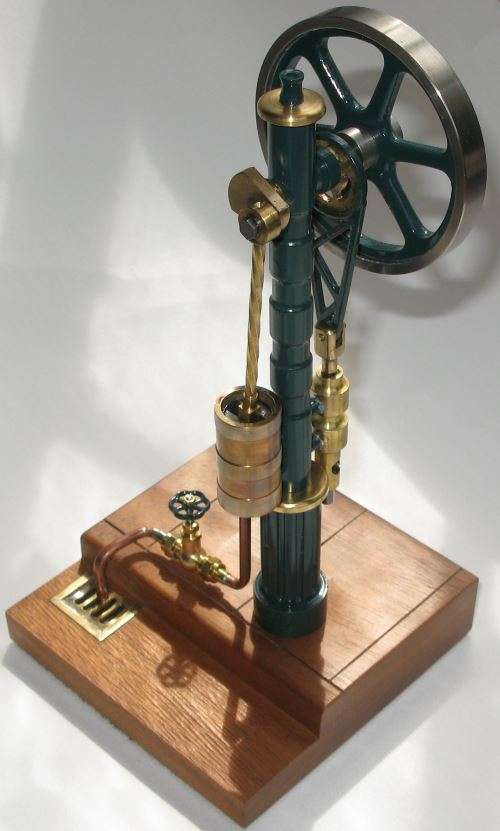 The cylinder was machined from phosphor bronze with 15mm bore and is roughly 30mm long. The piston was machined as a bucket and then the gudgeon pin fitted in blocks that were then soldered with the small end of the connecting rod fitted. I will need to unsolder this if I need to change the small end.

The valve pushrod was made with a mild steel outer eccentric ring and then using 2mm square brass tube I solder together this lattice.

There is a small brass bearing in the bottom end of the pushrod.

The valve block itself looks a bit like a whistle.

These valve blocks are easy to make, but be prepared for some time setting it up and getting it working. I had no adjustment screws and so had to machine the valve slightly to get the timing working correctly. 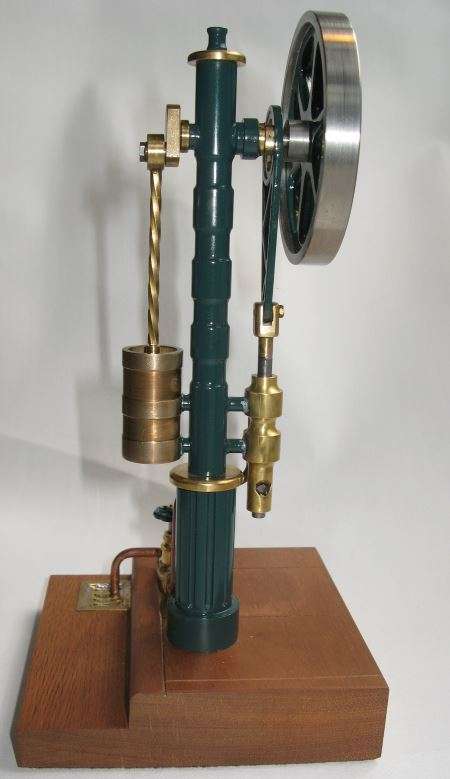 The connecting rod was made from 1/8″ hexagonal brass that I twisted – one end in the vice, the other in a tap wrench.

The ends are threaded 6BA to fit the end bushes.

The cylinder, valve block and post are all soft soldered together.

The lower rod through the post that connects the cylinder and valve block was drilled and is the main connection for steam inlet and exhaust.

The eccentric was milled out using a rotary table – it was rather heavy from solid brass and so needed to lose some weight.

There is a grooved turned in the eccentric and the screw you can see has a point that locates in this groove.

Must admit that I did not make the globe valve, bought this from Steam Fittings (steamfittings.co.uk).

I must admit that I’m never quite sure whether I should add a light to the top of the post and a generator running off the flywheel to power a small LED. The base is a piece of wood machined to look like a road with a gutter, brass drain cover and a kerbstone and path.

A simple small motor is used as a generator driving an LED.

A tyre runs against the flywheel and gives a simple gearing with a ratio of around 8:1.

A lantern was folded up from thin brass sheet.

This lantern bolts onto the top of the lamp post.

A perspex light bulb for the Lamp Post Engine.

This was machined using lots of cutting oil and ever finer sandpaper and then wire wool.

So now I have a model of a lamp post for steam powered street lighting.

The final Lamp Post engine and it running on compressed air.

The Dynamo is being driven by the flywheel at a ratio of 8:1

The dynamo powers the LED.

Plans for the lamppost engine are now available to download. 17 pages in a pdf file with lots of notes and images.

Since making plans available more people are building this engine and enhancing the design as they go. Take a look at MyfordBoy’s version of this engine and the cast lower lamppost.