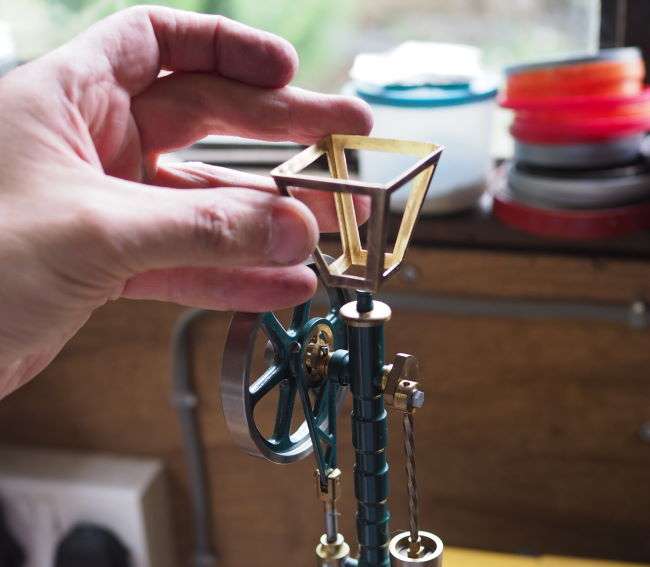 Making a lantern for the lamppost engine.

The lamppost engine has sat on display for years and gets run on compressed air every now and again.

It was always designed to have a lantern on the top to finish off the design, I had also played with the idea of running a generator from the flywheel to power a small LED.

I worked out the basic dimensions from an image of a street lantern that I found online.

Best to print the image in black and white, wash out the image and then draw onto it using brighter colours.

This immediately showed me the angle of the lantern was 14°. This also clearly shows that lines drawn on the edges meet at a point. This point and hence radius allows the complete 3D lantern to be drawn easily.

Marking Out the Brass Sheet

Filing the Lantern Panels to Size

The brass panels had been cut out roughly, but I needed to accurately file them. For this I made up a simple clamp using 1/4″ mild steel beams, fixed at each end using 6mm bolts. The edges of the mild steel were hardened using a case hardening compound.

A brass square was cut for the bottom with a 6mm hole through the middle. This hole was used for a simple screw to fix the base to a piece of wood, thus holding the base square.

A thin copper wire holds the folded lantern closed whilst I soft solder.

Offering up the lantern to the engine.

The original top green pip had an oil hole through the middle. This unscrews and in it’s place I needed to fit the upper part of the lamp post.

The upper section has a post at 90° with a bearing machined at the end. This will be used for the swing arm to which the generator will be fixed.

I have the basics of the Lantern for Lamppost Engine. I now need to finish the top finial, add a bulb, glaze the lantern and oh, add a generator.

In these plans we fully describe how to mark out and assemble the lantern as part of the overall lamppost project.

4 thoughts on “Lantern for Lamppost Engine”