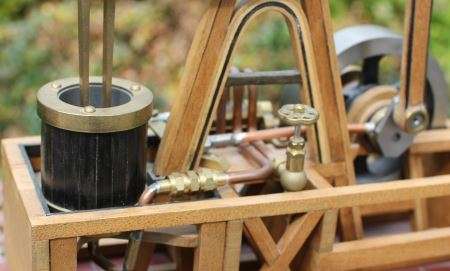 The design for a wooden beam engine hit me and I started sketching out ideas: a beam engine, but one with a difference, construction in lovely materials and running on compressed air.

If I make the cylinder rock from side to side I do not need parallel motion links. However, I will need a bearing that has a reasonable seal as it will be running compressed air through it.

The idea of an oscillating cylinder that then operates the inlet and exhaust valve is lovely. The operation of the valves in this way relies on a large angular movement of the cylinder or very precise and small ports.

However, this was not going to be the case here and so I had to rule this idea of a rocking cylinder out quite early.

The ′A′ frame will be a thin structure and so to brace this my first thoughts were that I could use a threaded bar and lock this to the lower frame of the base.

As the main forces are pushing the top of the A frame up and down this means it would need to be cross-braced for strength. Also, as this forms the pivot point it needs to be accurately located and aligned.

For the beam it would be nice if it could sit around the outside of the ′A′ frame. One point is that the structure needs to be open enough to clear the ′A′ frame over the full-rocking most. Most importantly it needs to be strong enough to take the bending force from the steam input to the crankshaft. This means it needs to be an open structure with the outer frame made from laminated wood to give it the rigidity it needs.

This next image shows my original early thoughts for the main beam. Along with a ‘T’ piece end fitting for the connecting rod. You need to think about the design of the main beam, pivot and connecting rods as one. Because they all have to work together,

The whole structre reminds me of a wooden aircraft fuselage structure in terms of basic design. The central structure will include the ′A′ frame, and later in the final design you will see the ‘A’ in the frame taken literally.

These were all early design elements and ideas, so some of these made it into the final wooden beam engine, others were just a nice idea. The following

This early photograph of the basic frame shows the simplicity of the design.

The top of the A frame has a piece of wood with quite a large area. It needs this to allow for the bearing for the beam pivot.

However, I think this already is a pleasing design in terms of proportion and materials.

You can read about the final engine – Wood and Metal Beam Engine.