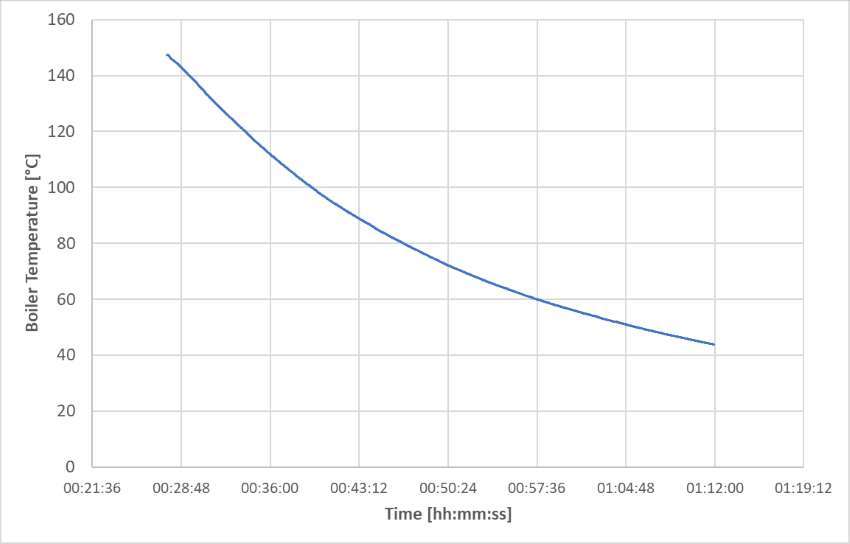 When measuring any thermal properties of an object, one of the first things to measure is the cooling curve. This will help to establish a number of factors. This is also a good curve to use to compare design options.

where k is a positive proportionality constant.

I instrumented the small vertical boiler that I’m making with 3 temperature probes connected to a data logger.

I then heated the boiler up to an operating point with the methylated spirit burner and then blew the flame out.

The boiler was then left in still air conditions to cool down whilst the temperature of the water in the boiler was measured every second.

The lower measurement point on the boiler is designed to get the bulk water temperature. There is only 75ml of water in this boiler and the total mass of water and copper is just 401g. At 144°C the boiler was at 40psi. This is the design operating pressure.

The curve below is the cooling curve and shows how the temperature decreases with time. From this you can clearly see how this is an exponential decay. The rate of cooling reducing as the body approaches the ambient temperature that was around 19°C in this case.

Comparing Designs with the Cooling Curve

The obvious thing to compare with a boiler is the cladding. So I heated the boiler up again without the cladding and again let it cool down. You can see that the boiler cools down more quickly. There is a higher rate of heat loss.

You will note that I have changed the x-axis to just read seconds, this was down so that I could more easily align the start point of the curves.

What I find surprising is that the rate of cooling has not changed that much. Something to think about in terms of the boiler design and in terms of the experimental errors maybe.

The repeatability of the cooling curve test looks rather good. Below is a comparison of two cooling curves from the traction engine boiler heat loss test object.

The cooling curves are remarkably close and so are the calculated heat loss versus temperature curves.