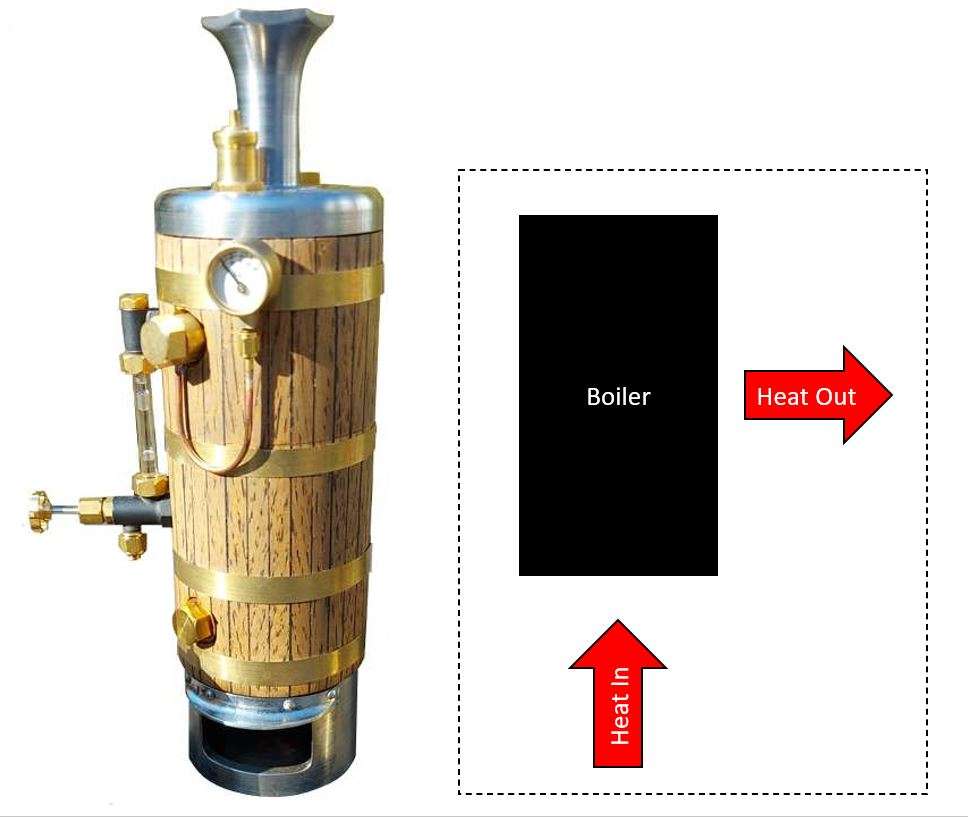 So, I’m building a Model of the Model Boiler. The model is a mathematical model and to be honest it is in the simplest terms. The boiler is the small vertical one made as a test case for the miniature traction engine. However, I think this will help to explain the calculations that I can then make.

In the first instance I’m considering the boiler as a single lumped mass of copper and water. Heat goes in and heat comes out.

Initially though I’m just considering the heat lost from the shell of the boiler. The steam outlet is locked off and I will only heat the boiler to the working pressure. No steam or heat is lost from the safety valve.

Step one though is to calculate the heat radiated by the boiler from the cooling curve. In this case there is no heat going in. The heat going out will be dependent on the temperature of the system.

This appears just so simple.

Starting with a lumped model like this allows you to run some initial calculations. Effectively approximations of the problem. Building a first order view of how it works.

The system is the boiler metal work that weighs 0.332kg and is mostly copper and the 0.075kg of water that is in the boiler.

Now that I know the heat loss I can increase the complexity and look at the case where the boiler is being heated. This will be interesting as I will then know how much heating power the methylated spirit burner has.

This is the original firebox design with the methylated spirit burner very close to the underside of the boiler.

This is the condition I’m trying to understand. I wrote an article around the issues I was having getting heat into the boiler. It was taking ages to heat up.

The model is only slightly more complex for this case. All I now have is a calculated heat loss versus temperature derived from the cooling curve added to the heat energy required to raise the temperature of the water and boiler.

In all of these models I have to do some averaging as I’m using the differential of the temperature and this can get quite noisy.

The boiler temperature versus time graph. This shows that as the boiler gets hotter the temperature gradually asymptotes.

Looking at the earlier graph of heat loss versus temperature this is fairly easy to understand when we have a fixed heat input to the boiler.

This allows me to calculate the heat input to the boiler using the methylated spirit burner. This is shows some significant highs and lows that are probably associated with the amount of methylated spirit available and random air currents.

Generally though this firebox and methylated spirit burner is generating approximately 54W. At the operating point of the boiler at 40psi and 140°C the losses are 35W. So, there is not that much headroom for adding more water or taking a bit more steam.

A model of the model boiler has given some interesting results. This is a very simple model and over time my intention is to increase the complexity.