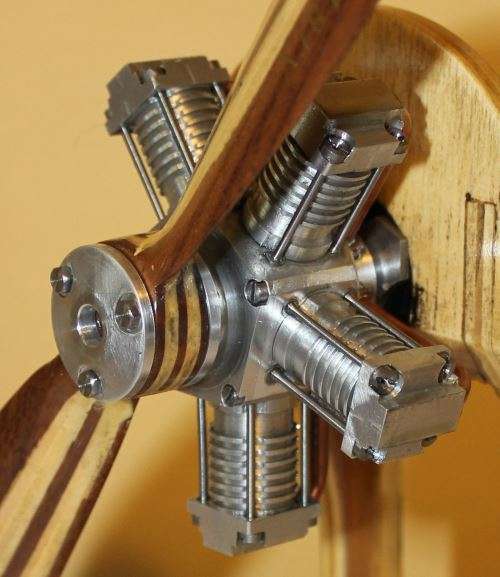 Before making or selecting a propeller it is worth understanding propeller dynamics. A propeller is an assembly of radially disposed blades with an airfoil shape that when rotated in air produce thrust.

For all of these design parameters we need to understand the stall mechanisms of a propeller blade.

The stall mechanism can be viewed in four different ways:

All these may occur simultaneously at the stall. The propeller dynamics are described in more detail below.

Of the four stall mechanisms, the impedance related stall is the one that perhaps the most insurmountable of them all.

The propeller size should be chosen to match the engine and airframe. However, it may take some trial and error before you get the right propeller for your particular installation.

Tables for two and four stroke engines give you a starting point for propeller size selection based on engine capacity.

The propeller on my tiny five cylinder rotary engine was made by hand. The main reason for making this propeller was that the direction of rotation was clockwise. Most commercial model engines rotate counter-clockwise. A simple mistake I made, but meant I had to make the propeller.

It was a chance though for me to make a propeller that looked more appropriate for the engine. The laminations give it strength. The large diameter and small pitch give it an elegant look at slow speed. However, for all of this I carefully blended the blade pitch from root to tip. Also, the blade has a smooth aerofoil cross-section with a rounded leading edge.