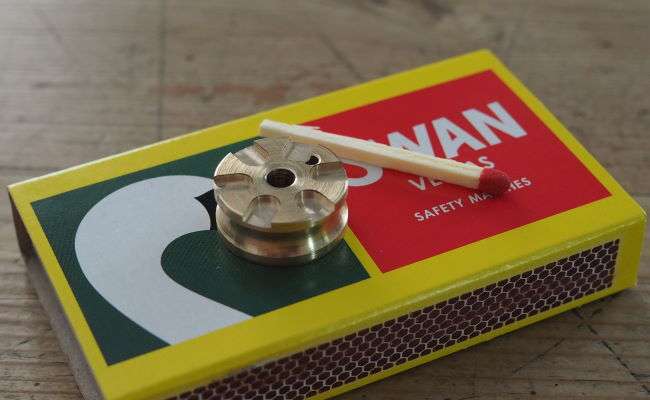 The front wheel hubs are quite small, 18mm in diameter, considering the features that are machined into them. This is my excuse then for having to machine 5 of these hubs before getting a pair that were correct. I don’t want wobbly wheels on my miniature Burrell traction engine.

The front wheels rotate independently on an axle and so need a bearing and fixing. My intention is to use a 4mm axle and 4mm thread on the end for fixing, this might change to a small split-pin.

I originally thought of making the hubs from steel with a phosphor bronze bearing. Then logic kicked in and I selected brass as it would be easier to make as one part and to solder the brass spoke to.

First task was to machine down the one inch diameter brass that I had in stock down to 18mm. An easy task with the Warco WM240B and my latest Soba chuck.

The front hubs have a simple 3mm radius half round machined into the barrel. A simple feature to machined with the 6mm TCT tool, but needs to be centred on the hub.

I use a piece of flat steel held across the face and against the TCT tool. I then move the tool to the point that I can nolonger see a slither of light between the flat steel and the face of the brass.

This means the tangent to the 6mm diameter TCT tool is aligned to one face of the hub. As the hub is 8mm wide I know the centre.

I then moved the tool along 1mm and machined to a depth of 1mm.

The hubs are drilled just under 4mm in diameter, they will be hand-reamed to 4mm after being parted.

At this point we have the basics for machining the hubs. But as you will see I have to repeat this many times until I finally get it right.

I needed to index the brass hub blanks so that I could machine the grooves for the ends of the spokes. Six grooves each side and the sides need to be overlapped (or out of phase) with each other.

I could have just spent time aligning them in the four-jaw chuck, but that wouldn’t allow me to index between faces. So I made a jig that would fit into the MT2 hole in the centre of the rotary table.

Here you see a post being soldered into the back of the short MT2 jig so that I can pull it into the taper and lock it’s position to the rotary table.

Sometimes you just get it so wrong. I had clamped the hub into the jig using a plate that covered most of the brass hub. Hence I didn’t realise I had misread the indexing table and was cutting with 5 divisions.

This hobby is all about learning, hence mistakes are made.

The hub at this point was aligned to the jig using a 2mm hole. This allowed the faces to be aligned, but as you will see they were not aligned accurately enough.

One of the first hubs I machined laying on a box of matches. This puts the scale of the hub into context.

They look good, but just not good enough, you can see that the two sides are not actually perfectly out of phase.

Part of the error was that the hub blank was not exactly on centre.

The second issue was that the use of a drill bit as the alignment system was poor as it allowed movement of the part.

Aligning the Table and Hub

So, next thing was to really accurately align the centre of the rotary table and the milling head. Then I had to look at a better way of locking the hub location relative to the table.

I milled a 4mm wide slot, same as the slot in the hubs, into the jig. This then meant I could use a piece of brass spoke to align the hub to the jig.

The final pair of hubs are rather pleasing, the 3mm radius groove just adds a to the look, the grooves are phased relative to each face.