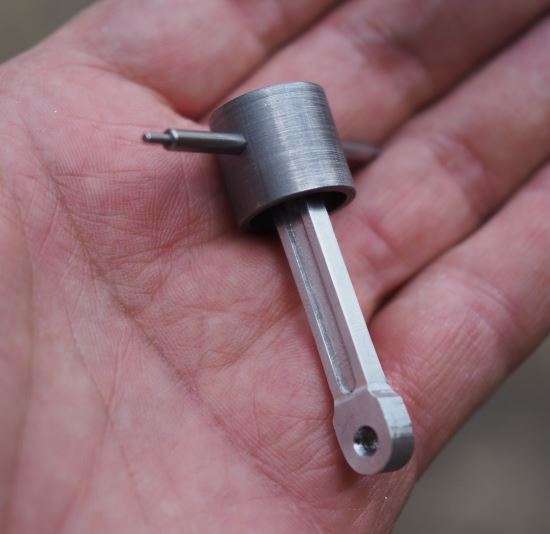 The piston is a cylindrical part which reciprocates in the cylinder bore of an engine and transmits the force of the gas pressure through the connecting rod to the crankshaft. This means the piston needs to seal against the cylinder wall with a low friction and a low wear rate.

Two-piece piston incorporating an entirely separate piston crown or dome with a separate skirt, linked together with the piston pin.

The combustion products and unburned air-and-fuel mixture that blows past the piston rings and enters the crankcase.

The bore and stroke of the piston sets the swept volume. The ratio of bore to stroke is a good indicator of the engine characteristic such as how high it will rev and basic fuel economy. More simply it also defines some of the basic dimensions of the engine such as height and length.

Distance from the centre of the pin hole to the deck of the piston.

The stroke of the piston during which the air charge in the cylinder is compressed by the piston movement.

A cylindrical lining that is inserted into the cylinder jacket or cylinder block and in which the piston slides.

Another name for the pin that joins the piston and connecting rod.

The portion of the piston between two grooves carrying the piston rings.

The material for the piston and the cylinder liner need to be considered.

They are dependent on engine speed, type of engine, fuel used, running temperature and durability requirements.

The side of the piston carrying the greatest thrustload.

Looking at the piston from the front in an engine rotating clockwise, this is the left side.

The average speed of the piston in the cylinder bore.

The piston ring, usually located at the lower part of the piston, that prevents an excessive amount of lubricating oil from being drawn up into the combustion space during the suction stroke. Also known as oil ring and oil scrapper ring.

A pin that rests in two bored holes in the piston and passes through the eye of the connecting rod, to join the two together flexibly.

Also known as the gudgeon or wrist pin.

The bearing either in the eye of the connecting rod or in the bored bosses of the piston, in which the piston pin rocks.

That part of the piston on the inside, through which the hole is made to take the piston pin.

The device used to hold or lock the piston pin in the piston.

A thin layer of ceramic to the piston head, cylinder walls and cylinder head will help reduce heat transfer. Thus the combustion gases remain at a higher temperature resulting in more complete and efficient combustion. A secondary effect is that thermal expansion will be reduced and so tighter tolerances can be maintained over the complete engine operating range.

Coatings may also be applied to reduce friction.

A split ring placed in a groove of the piston to form a leakproof joint between the piston and the cylinder wall.

The space between the ends of the piston ring when it is in the cylinder bore.

The part of the piston on the outside surface located between the piston-ring grooves.

The part of the piston below the piston-ring grooves. Designed to counter the lateral force from the connecting rod and guide the piston within the liner.

The piston skirt typically has a much thicker oil film than the rings because it remains under the oil control ring.

action of forcing pockets of air within the combustion chamber back towards the spark plug for better fuel distribution.

The movement of the piston from one end to the other of the piston travel in the cylinder bore. The piston stroke is equal to twice the throw of the crankshaft.

The component of the force applied to the piston acting at a right angle to the crank arm.

Another name for the pin that joins the piston and connecting rod.